The growing investments especially in the military and defense sector in terms of utilizing aluminum die castings for the production of lightweight weapon systems are anticipated to account for the substantial contribution to the industry growth. For instance, as per the Stockholm International Peace Research Institute database, North America has allotted over USD 827.1 billion in 2021 as compared to Europe with over USD 417.8 billion in military expenditures. Thus, the rising usage of aluminum die castings in terms of production of heavy-duty military vehicles such as military combat vehicles, aircraft, and ships due to the excelling performance in stress tests, and high resistance to abrasive environments.

How much is the Aluminium Die Casting Market worth ?

Additionally, the increased usage of aluminum die castings in the construction and building industry is expected to support the market growth during the forecast period owing to the wide application in manufacturing processes of the construction components. For instance, according to the statistics published by the Associated General Contractors of America, the construction industry is a major contributor to the economy of the U.S. The industry consists of over 745,000 employers with around 7.6 million employees. The industry is also expected to develop nearly USD 1.4 trillion worth of infrastructure annually. Thus, the growing applications of aluminum die castings such as curtain walling, windows, cladding, shop partitions, and prefabricated buildings in the construction industry are estimated to contribute to the market growth. In the context of the region, Asia Pacific is anticipated to contribute to the growth of the aluminum die-casting market share owing to the large presence of key market players combined with the domestic production of aluminum and related alloys for major industrial applications such as heavy machinery, construction, autos, and mass transit.

Aluminum die casting is referred to as a metal-forming process that allows the creation of complex aluminum components. The process involves completely melting the aluminum alloy ingots at very high temperatures. The liquid aluminum is inserted under high pressure into a steel die cavity or a mold which is made up of two halves. Due to the utilization of steel dies, the process has the scope of using the same mold repetitively before it deteriorates, the aluminum die casting process is ideal for the high-volume manufacturing of aluminum parts.

The rising demand for lightweight and high-strength aluminum die castings especially in the automotive industry for enhanced fuel efficiency and reduction in harmful emissions is the major factor that boosts the aluminum die casting market growth owing to the high demand, especially for sports utility and general utility vehicles. Moreover, the rising demand in the production of multiple applications such as cookware, patio furniture, complex equipment, structural or architectural applications, and others boosts the demand for aluminum die castings during the forecast period.

The mishaps in product manufacturing due to the lack of gas permeability which leads to product damage and deformation hampers the growth of the market during the forecast period. Furthermore, the large capital investment in factory setups combined with the unfavorable choice of major clients for manufacturing large components also restricts the market growth due to the increased availability of alternative metal alloys like magnesium and zinc alloys with enhanced features such as relatively lower weight, corrosion resistance and wide availability of the natural resource metal.

The replacement of conventional iron and steel usage by aluminum especially in the production of automotive parts is expected to create lucrative opportunities for industry growth during the forecast period. Additionally, the growing emphasis on creating an environmentally friendly product in terms of reduced carbon emission during the manufacturing processes is also anticipated to create profitable opportunities for industry growth in terms of value.

The aluminum die casting industry has been drastically impacted due to the COVID-19 pandemic in the majority of countries around the globe. The factors such as logistics disruption, uncertain raw material prices, and an unemployed labor force due to the minimal production processes are the major impacts of COVID-19 which hampered market growth. Also, the shipments were impacted during the initial phases of global lockdowns due to the stringent government regulations, especially in terms of imports from China (one of the major manufacturers of aluminum die castings) and the closure of the manufacturing facility which led to the weakened the processes, especially in the automotive industry. However, the situation has stabilized and as a result, it is determined that COVID-19’s overall impact on the industry is moderate. Post covid-19, there was a positive impact on the market growth due to the rising need for die-casting products in terms of the increased automobile production.

The process segment is divided into pressure die casting, permanent mold casting, and sand casting. Pressure die casting is expected to contribute the largest revenue share of over 76.1% to the market growth during the forecast period. The factors such as the precise ability to produce large volumes of similar metal components, low-cost production of the mass-produced castings, and rapid manufacturing rate due to the instant filling and solidification of the molten metal into the dies are projected to support the growth of pressure die casting segment. Moreover, the permanent mold casting segment is also expected to witness substantial growth during the projected period owing to the superior surface finish, improved dimensional tolerance, and consistent mechanical properties. 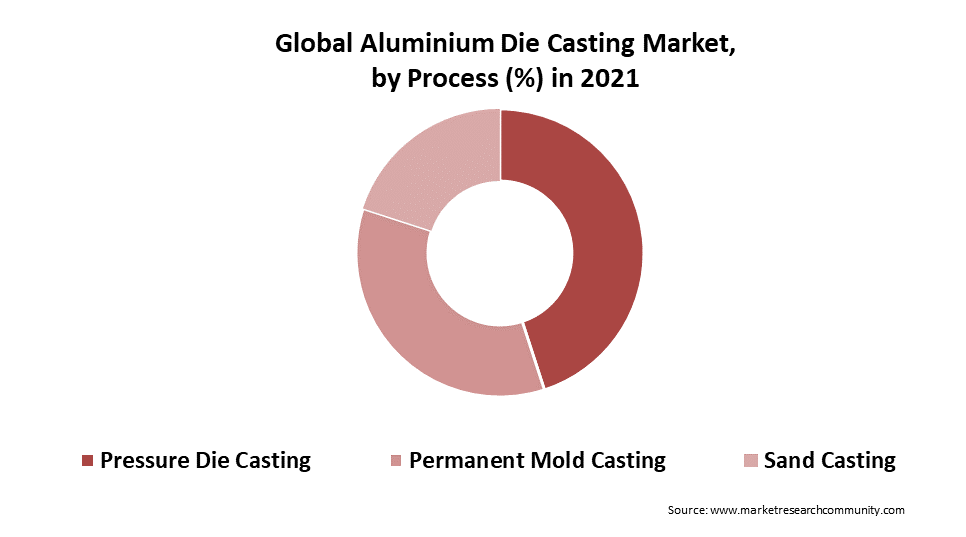 The application segment is separated into transportation, industrial, building & construction, telecommunication, consumer durables, energy production, and others. The transportation segment is estimated to contribute a significant market share of over 64.2% during the forecast period. The factors such as augmented usage in the production of lightweight vehicles owing to the features such as lightweight, high electrical and thermal conductivity combined with the increased demand for vehicles with improved aluminum chassis production due to the great fuel efficiency are expected to support the growth of the transportation segment. Additionally, the consumer durables segment is also anticipated to witness substantial growth in terms of volume owing to the rising utilization of aluminum die casting products in the manufacturing processes of consumer electronics, furniture, and furnishings combined with the increased industrial capital expenditure in terms of large production of the products such as washing machines, electronics, and others.

The regional segment includes Asia Pacific, Europe, North America, the Middle East, and Africa, Latin America. Asia Pacific is estimated to contribute the largest share in terms of over 44.2% to the growth of the aluminum die casting market statistics. The factors such as the rapid expansion of the aluminum die casting manufacturing sector, especially in India and China coupled with the availability of low labor costs and favorable government initiatives such as 100% foreign direct investment (FDI) in terms of auto components production are anticipated to boost the market growth in the Asia Pacific region.

North America is also estimated to register the fastest growth in terms of value during the forecast period. The factors such as the emphasis on fuel-efficient vehicles retention terms of vehicles with fuel efficiency owing to the North American Free Trade Agreement (NAFTA), large consumer demand, especially for lightweight cars, and favorable spending on the introduction of high-quality aluminum alloys for the promotion of recycling by die casters expected to accelerate the industry size in the North American region.

The competitive landscape of the market has been evaluated in the report with detailed profiles of the key industry players. Further, the analysis portrayed that the market is fragmented due to the large presence of local and global firms that are expected to boost the growth of the sample preparation market in terms of partnerships, mergers & acquisitions, and joint ventures for augmented market penetration. The major players operating in the market include-

At what rate the Aluminum Die Casting Market is estimated to grow?

Asia Pacific is estimated contributed the largest share of the market growth.

The rising demand for lightweight and high-strength aluminum die castings especially in the automotive industry for enhanced fuel efficiency and reduction in harmful emissions.

Which is the major process segment in this market?

Pressure Die Casting are anticipated to contribute the largest share to the process segment.