Ammonium Sulfate Market was valued at USD 2.69 Billion in 2021, registering a CAGR of 6.9% during the forecast period (2022-2030), and is projected to be worth USD 4.90 Billion by 2030. The growing demand for ammonium sulphate in the production of nitrogenous fertilisers, which are widely employed in the agricultural industry, can be ascribed to the market expansion. The need for solid ammonium sulphate dominates the market and need for its liquid counterpart is predicted to be driven by the demand for water treatment. Further, The demand for agrochemicals is projected to continue to rise due to the rising global population’s increased demand for food crops.

An inorganic sulfate salt called ammonium sulfate is produced when sulfuric acid reacts with two equivalents of ammonia. It is a common fertilizer for alkaline soils because it is a high-melting (decomposes over 280°C) white solid that is particularly soluble in water (70.6 g/100 g water at 0°C; 103.8 g/100 g water at 100°C). It functions as fertilizer. Further, ammonium sulfate is both an inorganic sulfate salt and an ammonium salt.

Consumption of goods used in fertilizers, which contain sulfur and nitrogen, is the main factor driving the global ammonium sulfate market. Due to its high pH, it is mostly utilized to lessen the acidity of alkaline soils. The product includes Sulphur and nitrogenous components; which plants utilize to make proteins. Additionally, nitrate-based fertilizers are not a good choice for flooded soils used for rice farming since they might cause denitrification and leaching.

The health of humans is considered to be jeopardized by ammonium sulphate. Due to inhalation of water droplets and dust, exposure to the product during production, and during transportation is expected to result in severe respiratory route infection. Prolonged skin contact may result in dermatitis, long-term eye and lung damage. These elements are expected to impede ammonium sulphate market expansion.

The COVID-19 pandemic’s influence on public health and the biochip supply chain led to an imbalance in supply and demand. With assistance from academic institutions and biopharma businesses, product demand expanded. For instance, a team of scientists from The Czech Academy of Sciences (the CAS) created a device with a biochip to identify the COVID-19 virus in January 2022. The researchers claim that a biochip is equally accurate and as quick as a PCR test. It is anticipated that the use of biochip technology in a variety of applications will accelerate industrial growth.

During the forecast period, with a sales share of more than 90.0% in 2021, the solid segment dominated the ammonium sulfate market. The reason for this is a rise in demand for the solid segment. As an organic sulfate salt, ammonium sulfate is typically recognized as a white, odorless solid. It readily dissolves in water but hasn’t been seen to do so in acetone or alcohol. Due to their capacity to improve the nutritional content and Sulphur shortage of alkaline soils, solid ammonium sulfate crystals are widely utilized as fertilizers in this environment. Since the solid or crystalline grade has a higher level of purity, it is projected that it will become more popular in the pharmaceutical sector. 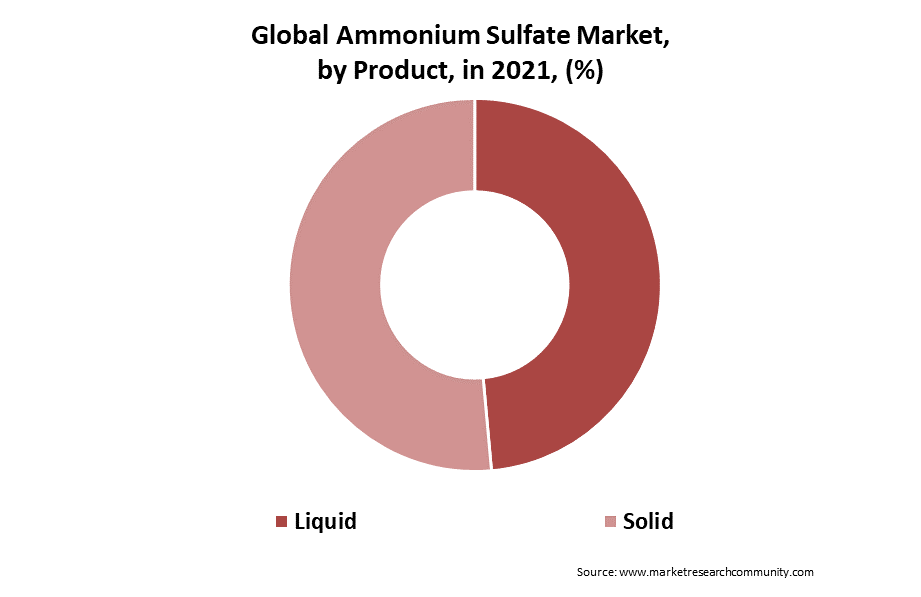 The segment with the highest revenue share in 2021 with 70.0% was fertilizers in the ammonium sulfate market. Ammonium sulfate, includes both nitrogen and Sulphur, is used as a fertilizer for alkaline soils, which is why there is a demand for it. Over the projected period, rising fertilizer usage is anticipated among economies with a strong agricultural sector. The product decomposes in the soil to produce ammonia, Sulphur dioxide, nitrogen, and water. Plants employ nitrogen and ammonia to create amino acids, while Sulphur is necessary for metabolism. 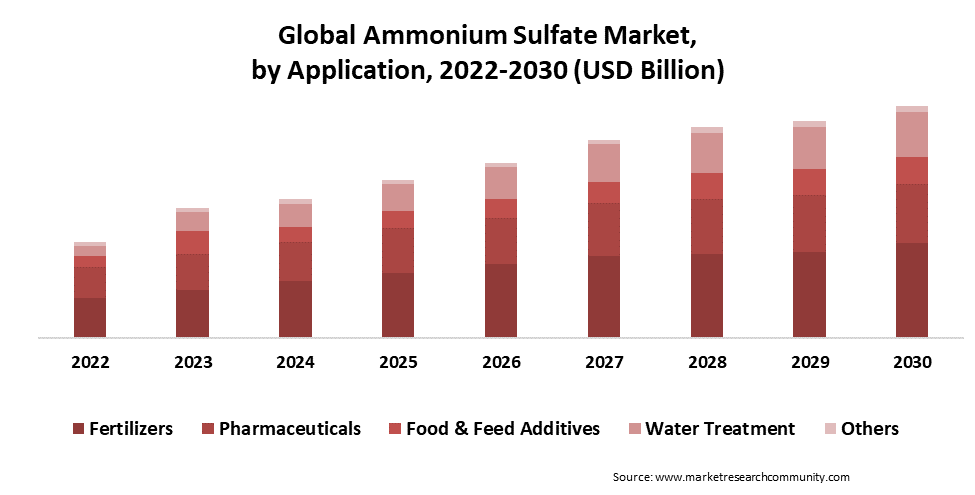 The competitive landscape of the market has been analyzed in the report, along with the detailed profiles of the major players operating in the industry. The majority of manufacturers are concentrating on new product launches, improvements to the current product, and mergers and acquisitions. The key player in the market include-