Amyl Nitrite Market Size was valued at USD 147.5 Million in 2021, registering a CAGR of 8.6% during the forecast period (2022-2030), and the market is projected to be worth USD 309.9 Million by 2030. The increased prevalence of heart diseases such as arrhythmia, heart attack, heart failures, and others due to sedentary lifestyle-related health concerns like diabetes, high blood pressure, and increased risks of colon cancer is expected to expand the demand for amyl nitrite as a treatment intervention. For instance, according to the report published by the Centers for Disease Control and Prevention that in 2020, over 697,000 people died from heart disease in the United States which is 1 in every 5 deaths. Thus, the high demand for the treatment of cardiovascular diseases is anticipated to accelerate the growth of the amyl nitrite market due to the increased use of amyl nitrite as a vasodilator or improved dilation of blood vessels in the patient body.

Amyl nitrite is a clear, pale yellow liquid chemical that has a distinctive sweet odor. The chemical is used as the medication for the treatment of heart problems like congestive heart failure and chest pain. The amyl nitrite liquid chemical is administered through inhalation for fast absorption in the lungs, which aids in smoothening muscle functions. Furthermore, the excess use of amyl nitrite leads to side effects such as increased heart rate (tachycardia), headache, and low blood pressure (hypotension).

The application segment is trifurcated into the pharmaceutical industry, healthcare industries, households, and industrial purposes. The pharmaceutical industry segment is expected to contribute the largest share in 2021. The factors such as the large demand for amyl nitrite-based depressants like Seconal, Pentothal, phenobarbital, and Nembutal, availability of innovative drug interventions, and rising expenditure on the vaccine and drug development are estimated to support the growth of the pharmaceutical industry segment during the forecast period. Also, the healthcare industries segment is anticipated to register the fastest CAGR growth during the projected period owing to the rising demand for amyl nitrate-based muscle relaxants, especially for uterine relaxation during difficult deliveries, enhanced treatment of cyanide poisoning, and growing demand for sedatives for complicated surgical treatments are estimated to support the growth of healthcare segment. 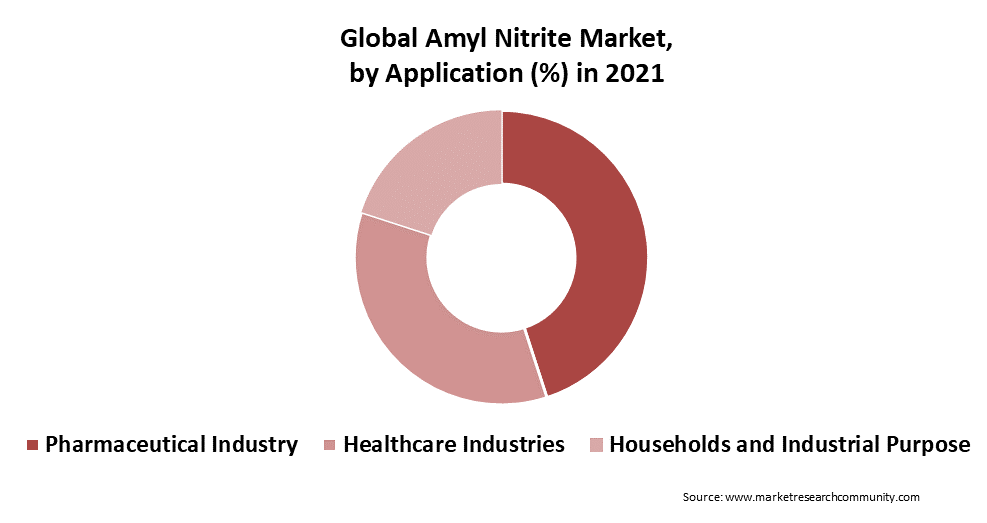 The end-user segment is bifurcated into heart patients and the general public. The heart patients segment is expected to contribute the largest share of over 32.5% during the forecast period. The factors such as increasing the oxygen and blood supply to the heart, reversal of cyanide poisoning, and increased demand among medical professionals as prescription-based medication for acute relief of chest pain caused due to the reduced blood flow to the heart (angina condition) are estimated to support the growth of the heart patients segment. Furthermore, the general public segment is also projected to contribute the second largest share to the growth of the amyl nitrite market due to the rising demand for amyl nitrite products for the enhancement of sexual experience among the adult population combined with the rising acceptance of amyl nitrate (poppers) as vinyl cleaners, air fresheners, or nail polish remover available in online novelty stores. Thus, the above-mentioned segments are anticipated to support the growth of the amyl nitrite market during the forecast period.

Furthermore, Latin America is also expected to register the fastest CAGR growth during the projected period.  The factors such as the high purchasing power of the population, large availability of amyl nitrite as poppers especially in countries such as Brazil, Argentina, and Costa Rica, and rising demand among medical professionals as a prescription for relief from cardiovascular diseases are anticipated to boost the amyl nitrite market growth in the Latin American region.