Anti-fingerprint technology has revolutionized all during these years owing to the introduction of highly durable consumer electronics and industrial goods. For instance, increasing market demand for smart products such as smartphones, automotive accessories, smart home devices, and others are influencing the demand for highly engineered products. Manufacturers such as Corning and Asahi Glass are constantly investing to make their glass products better in order to enhance consumer experiences. Owing to factors such as enhancing the durability of end-user products and boosting the consumer experience, anti-fingerprint technology is playing an important role. Additionally, changing market requirements and a shift from topical coating to anti-fingerprint coating are paving a new path towards new innovation of new products. For instance, products ranging from smartphones to Human Machine Interfaces in automotive are having a higher demand for best-suited touch screens that can create higher consumer satisfaction. Thus, anti-fingerprint coating-based plastic and glass components are found to be widely consumed by industries such as consumer electronics, automotive, and others. Moreover, the key application of the anti-fingerprint coating is to remove sebum and water contents covering the screen of HMI’s, mobile phones, tablets, and other consumer electronic devices is accounted to be boosting its demand in the global market.

How much is the Anti-Fingerprint Coating Market worth ?

Further, technological advancements in the field of IoT has enabled automobile manufacturers to equip vehicles with Human-Machine Interface (HMI). The HMI can be defined as a dashboard that enables the users to communicate with their vehicles via touchpads. Surge in installation of HMI in vehicles to improve the driver safety by allowing users to hear real-time traffic conditions is considered to be another factor that is boosting the demand for anti-fingerprint coating globally. Additionally, implementation of advanced driver assistance systems in vehicles in order to provide drivers with safety warnings along with braking and steering support requires installation of HMIs in vehicles. The ADAS requires HMIs for displaying navigation maps and improving the passenger’s safety by providing advanced features that assist during vehicle driving. Thus, governments worldwide are taking initiatives to mandate automobile manufacturers to equip vehicles with ADAS systems. For instance, in July 2021, the European government made ADAS mandatory for all vehicles from 2022. Thus, rise in deployment of ADAS in the vehicles is one of the key factors boosting the adoption of HMIs, in turn driving the growth of global anti-fingerprint coating market. Also, factors including rapid pace of industrialization, upgraded technology, increasing disposable income, availability of a wide range of models, and others are accelerating the demand and production from the automotive sector. According to the International Organization of Motor Vehicle Manufacturers, the total automotive production across the world amounted to 80.2 billion units in 2021, depicting an increase of 3% in comparison to 77.7 billion units in 2020.

The Oleophobic Coating segment is anticipated to contribute the largest revenue share of over USD 416.05 million in the year 2025 during the forecast period. Oleophobic coatings are mainly used in glass and ceramic surfaces in order to create an oil-resistant, anti-fingerprint surface that is resistant to dust, oils, dirt, and other particles, which in turn, creates a surface that is easy to clean and maintain. Moreover, fluoropolymer-based solids and non-polar polymers are often utilized as oleophobic coating displays. Oleophobic coatings are commonly applied by using vacuum vapor deposition, which makes them thin with high light transmissibility. Additionally, oleophobic coatings help in reducing fingerprint smudges and other particles, thereby generating a layer of protection between a user’s fingers and the substrate. These coatings also offer anti-glare properties. These characteristics of oleophobic coatings make them ideal for use in capacitive touch screens, display devices, handheld devices, and other similar applications.

Additionally, the Oleophilic Coating segment is expected to grow at a CAGR of over 6.8% during the forecast period. Oleophilic coating is a new and emerging approach to anti-fingerprint treatment and solution. Oleophilic coatings work on the mechanism of hiding the fingerprints from a substrate rather than preventing it.  The mechanism is also known as an invisible fingerprint (IF). The oleophilic properties enable oils from the fingerprint to spread across a surface instead of remaining in one place, which in turn, forms a sub-nanometric film that allows light to pass continuously at most angles. This process further creates an optical illusion of the fingerprints not being present on the surface at all. Oleophilic coatings are optically transparent and offer high durability and resistance against long-term wear. Moreover, oleophilic coatings offer longer-lasting fingerprint-hiding solutions and antimicrobial efficacy, which makes them ideal for use on various surfaces in the electronics, household, and automotive sectors.

The Application segment is divided into Consumer Goods, Building and Construction, Automotive, Solar Panels, Stainless Steel, and Other. 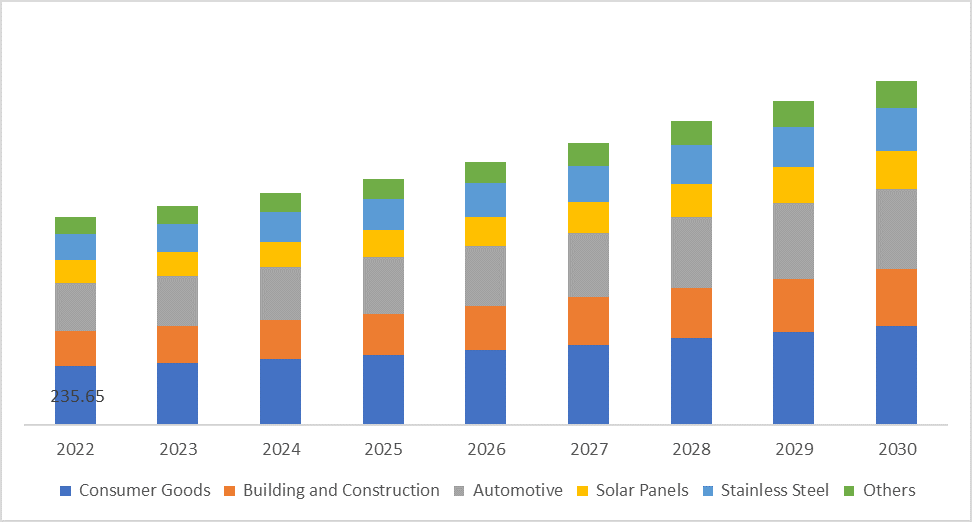 The regional segment includes North America, Europe, Asia Pacific, the Middle East and Africa, and Latin America. In 2021, North America region is considered to contribute the largest revenue share of USD 279.43 million. The North America region is accounted to hold major market shares all through the years owing to the presence of major market players for chemicals, automotive, paint and coatings, and others. Countries such as Mexico are also attaining to have promising sales figures during the past five years. According to Instituto Nacional de Estadistica y Geografia (INEGI), Mexico alone had a production volume of approximately 2.9 million units of vehicles in the year 2021. Furthermore, the U.S. alone had a production of 9.2 million units of vehicles in the year 2021 (Source: Statista). Accordingly, it can be analysed that the overall production for vehicles is high in the region and is accounted to garner sales for automotive components. Moreover, automotive components such as sensors, HMIs, automotive displays, screen cameras, and others containing anti-fingerprint coating are generating significant revenue in the region.

The competitive landscape of the market has been analyzed in the report, along with the detailed profiles of the major players operating in the industry. Further, the surge in Research and Development (R&D), product innovation, various business strategies, and application launches have accelerated the growth of the Global Anti-Fingerprint Coating Market. Key players in the market include-