Bariatric Surgery Market is projected to be worth USD 5.45 Billion by 2028, registering a CAGR of 11.2% CAGR during the forecast period (2022-2028), The market was valued at USD 2.59 Billion in 2021. The closure device is estimated to grow at a high CAGR during the forecast period as they are highly used in minimally invasive surgeries. Non-invasive surgeries are projected to lead the surgery type segment. Further, the regional segment is dominated by North America due to the increasing number of obese patients in the region.

Bariatric surgery can refer to a wide range of operations, including gastric bypass and other weight-loss surgeries. Bariatric surgery is a medical procedure that helps patients to lose weight and excess fat in the body by adjusting or modifying the digestive tract. These surgeries are effective in the treatment of diabetes, sleep apnea and high cholesterol, high blood pressure, and other diseases.

Increasing demand for weight loss procedures is estimated to drive the demand in the bariatric surgery market. The factors responsible for the growth of the market are increasing consumption of fast food, and an unhealthy lifestyle. Further, growing government approvals for bariatric surgery devices are estimated to lift the growth of the market in the forecast period.

Expensive treatment and surgeries are estimated to impede the growth of the bariatric surgery market to a certain extent. As most of the global population is middle class and unemployed. For instance, in 2020, the global unemployment rate has increased by 1.1% and reached 6.5% from the previous year (Source: United Nations Statistics Division Development Data and Outreach Branch).

The rising number of FDA approvals for bariatric surgery devices and treatments is estimated to bring good opportunities for the key manufacturers in the market.

The bariatric surgery market has been significantly impacted due to the COVID-19 pandemic in many different parts of the world. Shipments were impacted during the initial lockdown due to a labor shortage and the closure of a manufacturing facility. The pandemic’s initial effects in China were tremendous. However, the nation’s circumstances have stabilized, and all product and service production rates have increased. As a result, it is determined that COVID-19’s overall impact on the bariatric surgery market is moderate. Post covid-19 there was a positive impact on the bariatric surgery market as consumers were more focused on health, and aware about chronic illness which increased the demand for Bariatric Surgeries. 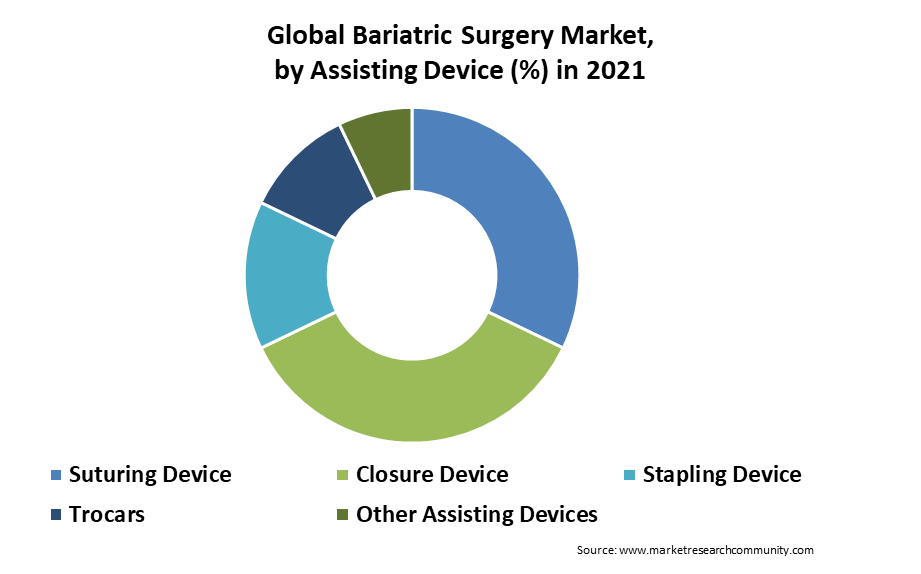 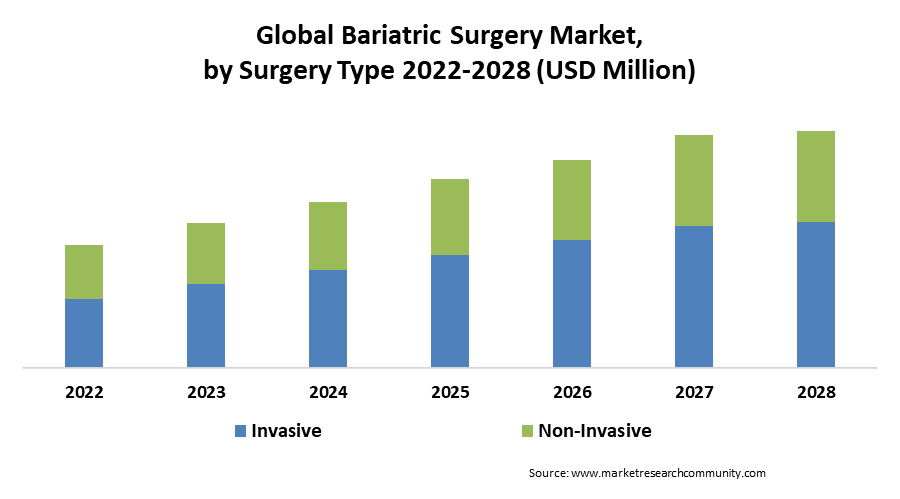 The regional segment includes Asia Pacific, Europe, North America, Middle East, and Africa, Latin America. North America is predicted to dominate the growth of the bariatric surgery market due to rising awareness regarding bariatric surgery, and advanced healthcare infrastructure. Further, the US is estimated to lead the region and hold the highest market share. As two out of three US adults are overweight or obese (69%). Further, obesity rates have increased in the US among men, Mexican American women, and Non-Hispanic Black women. Besides, continuation of this trend is estimate  that approximately half of men and women will be obese by 2030. Therefore, the above-mentioned factors estimated that North America is estimated to grab a high market share in the bariatric surgery market.

The competitive landscape of the market has been analyzed in the report, along with the detailed profiles of the major players operating in the industry. Further, the surge in Research and Development (R&D), product innovation, and various business strategies have accelerated the growth of the market. For instance, in October 2019, Gordian Surgical Ltd. Company raised USD 3 million in funds for the commercialization of its TroClose 1200 access-closure system in the US for laparoscopic surgery.