The high demand for butylated hydroxytoluene (BHT) in the food & beverage industry is projected to witness substantial growth during the forecast period due to the increased need for preservatives in packaged foods. For instance, the US Food and Drug Administration ranks BHT under the category of generally recognized as safe (GRAS) as a food preservative for utilization in an approved manner. Thus, the increased preference as a food preservative by the food and beverage industry is expected to accelerate the butylated hydroxytoluene market statistics during the forecast period.

Additionally, the growing production of plastics especially thermosetting resins and thermoplastics are also anticipated to fuel the demand for butylated hydroxytoluene due to reduced risks to oxidation in the production procedure. For instance, in 2019, the report published by the Plastic Atlas stated that global plastic production is projected to increase by over 465 million tons. Thus, the growing demand for plastics in multiple industries such as automotive, packaging, agriculture, and construction is expected to support the growth of the market growth owing to the stabilization of plastics in industry applications.  In the context of the region, North America is anticipated to contribute to the market growth during the projected period. The factors such as increased consumption of packaged foods among the population combined with the large presence of structured retail channels are estimated to accelerate the industry growth in the North American region.

Butylated hydroxytoluene (BHT), also referred to as dibutyl hydroxytoluene, is a chemical compound formed from the reaction of 4-methyl phenol with 2-methyl propene. The chemical is widely used in multiple industries such as plastic, food & beverage, cosmetics, and others due to its antioxidant properties.

The wide applicability of butylated hydroxytoluene as a food preservative and increased medicinal use for the treatment of ailments such as acquired immunodeficiency syndrome (AIDS) and genital herpes coupled with the augmented demand from polymer industry as an antioxidant owing to the reduced risk to factors such as loss of tensile strength and flexibility, change of color, surface deterioration, and reduced impact resistance drive the growth of the butylated hydroxytoluene market. Also, the surging use of BHT in the production of animal feed, the cosmetic industry, and the automotive sector for increasing the shelf-life of the products are the major factors that accelerate the market growth during the forecast period.

The strict regulations in terms of excessive usage of synthetic antioxidants in food products due to multiple health risks such as carcinogenic activity, liver enlargement, allergic reactions, organ system toxicity, and others hamper the market growth. Additionally, the availability of safer food additives as alternative to BHT also hampers the market growth during the forecast period owing to the rising consumer preference for natural and safe active ingredients into the product.

The butylated hydroxytoluene industry has been significantly impacted due to the COVID-19 pandemic in many different parts of the world. The factors such as transportation restrictions, uncertain consumer demand, limited availability of raw materials, and low rubber and plastic production are the major impacts of COVID-19 which hampered the market growth. Shipments were impacted during the initial lockdown due to the trade restrictions and the closure of a manufacturing facility owing to the government-imposed lockdowns. However, the circumstances have stabilized and as a result, it is determined that COVID-19’s overall impact on the industry is moderate. Post covid-19, there was a positive impact on the market growth due to the increased demand of the chemical as antioxidant in manufacturing processes of major industries such as the automotive, construction, and polymer industry.

The application segment is divided into food, personal care & cosmetics, animal feed, industrial fats, oils & fatty acids, lubricating & specialty oils, food packaging, rubber, printing inks and coatings, and others. The food segment is projected to contribute the largest revenue share of over USD 106.6 million during the forecast period owing to the growing demand for processed food products such as prepared cereal and snack products, frozen convenience foods, and dried and processed meat. Additionally, the animal feed segment is also expected to grow at a CAGR rate of over 6.2% during the forecast period. The factors such as using BHT for the prevention of loss of nutrients in animal feed owing to the increased digestibility in animals combined with the decreased risks of oxidative stress on the production of meat are projected to support the growth of the animal feed segment during the projected period. 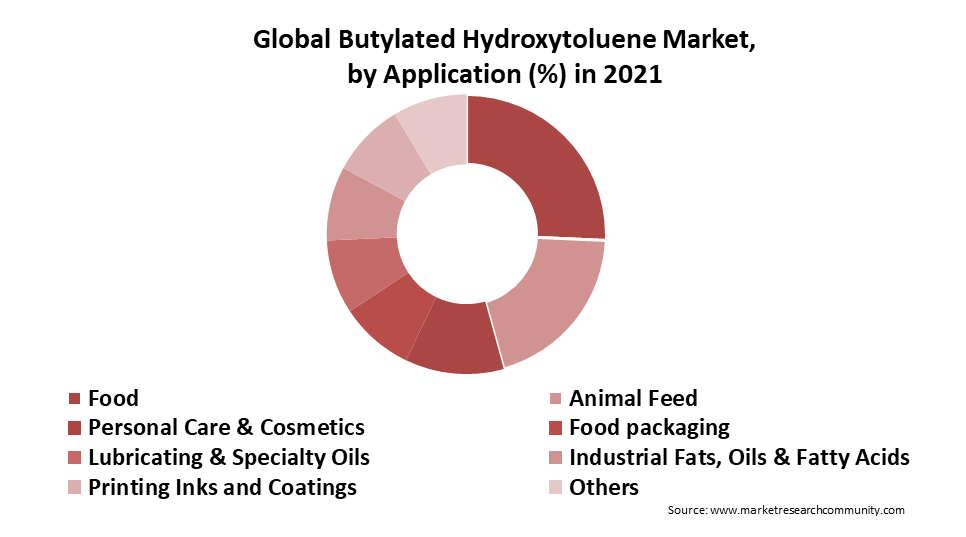 The end-user segment is divided into plastic & rubber, consumer products, oil & gas, food & beverages, and automotive. The plastic & rubber segment is expected to contribute the largest share of over 57.8% in 2021 due to the increased use of BHT for the stabilization of polymers during processing, the improved service life of the final product, and growing safety approvals of plastic in food wrappings and containers. Further, the food & beverages segment is also anticipated to contribute to the butylated hydroxytoluene market. The factors such as increased customer preferences for packaged food products, easy convenience to healthy food, and rising expenditure by the major food and beverage industry players in food product safety are estimated to support the growth of the food & beverages segment during the forecast period.

The regional segment includes Asia Pacific, Europe, North America, the Middle East, and Africa, Latin America. In 2021, North America is projected to contribute the largest revenue share of over 120.2 million during the forecast period. The factors such as the large presence of key market players, rising consumption of packaged and processed food products due to busy work schedules and hectic lifestyle of the majority population, and huge availability of structured retail channels for product distribution are expected to support the growth of butylated hydroxytoluene market size in North American region.

The Asia Pacific is expected to witness substantial growth during the forecast period. The factors such as increased demand for BHT-based plastics due to the expansion in plastics and rubber sectors combined with the strong customer base and growing government initiatives for economic development are anticipated to boost the growth of the market in the Asia Pacific region.

How much is the Butylated Hydroxytoluene Market worth?

The Butylated Hydroxytoluene Market is worth USD 379.1 Million by 2030.

North America is projected to contributed the largest share of the market growth.

What is the leading market-driving factor?

The wide applicability of butylated hydroxytoluene as a food preservative and increased medicinal use for the treatment of ailments such as acquired immunodeficiency syndrome (AIDS).

Which is the main application segment in this market?

Food are anticipated to contribute the largest share to the application segment.