Carborundum Market was valued at USD 3.1 Billion in 2021, registering a CAGR of 12.1% during the forecast period (2022-2030), and the market is projected to be worth USD 8.67 Billion by 2030. The increased use of abrasives in multiple residential, industrial and technological applications is expected to witness significant growth due to rapid urbanization. For instance, the United Nations Industrial Development Organization published a report named statistical indicators of inclusive and sustainable industrialization which reported that global industrial manufacturing has attained the milestone of USD 12,863 billion, further growing the global market value added (MVA) growth rate from 2.7 percent in 2016 to 3.5 percent in 2017, recording the highest growth since last six year. Thus, the high demand for corundum abrasives in the form of honing stones, pulp stones, grinding wheels, cutoff wheels, sandpapers, polishes, and sandblasting purposes in augmented industrial processes is anticipated to accelerate the growth of the carborundum market during the forecast period.

Additionally, the rising production in automotive industries is expected to accelerate the demand for carborundum for the production of ceramic brakes, carbide chips, batteries, and others. For instance, the Society of Indian Automobile Manufacturers (SIAM) stated that the automobile industry manufactured a total of 22,933,230 vehicles which include commercial vehicles, passenger vehicles, two-wheelers, three-wheelers, and quadricycles from April 2021 to March 2022, with a slight increase in the manufacturing of same vehicles from April 2020 to March 2021 of 22,655,609 units. Thus, the increasing demand for automobiles among the population is estimated to support the growth of the carborundum market. In the context of the region, North America is anticipated to contribute to the growth of the carborundum market. The rising demand for carborundum in the production of semiconductors, telecommunications, electronic devices, pharmaceuticals, and others and rising expenditures from major market players for technology adoption is projected to accelerate the carborundum market in the North American region.

Carborundum, also referred to as silicon carbide (SiC), is a crystalline inorganic compound made of carbon and silicon. Carborundum is used as an abrasive for grinding, cutting, and polishing coupled with other applications such as increased use as an antislip additive, ceramics, and refractories due to the factors like high thermal conductivity, stiffness, and low thermal expansion.

The wide applicability of carborundum as raw material in multiple refractory applications such as furnaces, linings of kilns, and reactors combined with the casting process of metals like cast iron, steel, and aluminum due to high-temperature resistance are the major factors that fuel the growth of the carborundum market during the forecast period. Additionally, the increased demand for carborundum for the production of silicon carbide chips, semiconductors, and the wet and dry paper coupled with printmaking applications such as paint, powder, and paint also boost the growth of the carborundum market.

The high cost of carborundum material which ranges from around USD 800 to USD 2,000 per ton combined with the availability of low-cost alternatives to carborundum for product manufacturing restrict the growth of the carborundum market. Additionally, the increased concerns of health-related risks such as cancer due to mismanagement of such highly reactive substances and lack of distribution channels especially in underdeveloped nations such as Indonesia, Mexico, and Brazil hamper the carborundum market growth.

COVID-19 Analysis of the Carborundum Market:

The type segment is separated into black SiC, green SiC, coated SiC, metallurgical SiC, refractory SiC, and micro grit SiC. The black SiC segment is anticipated to contribute the largest share of over 55.2% in 2021. The factors such as the large demand for powder, block, and grain products of carborundum especially in electric arc furnaces, high tensile strength due to its brittle nature, and growing use for precision grinding are estimated to support the growth of black SiC segment during the forecast period. Additionally, the green SiC segment is also expected to register the fastest CAGR growth during the projected period owing to the increased popularity among hardest man-made minerals, high resistance against extreme temperatures, and rising use as specialty ceramics in the production of wear-resistant seals, metal-matrix composites, and nozzles. 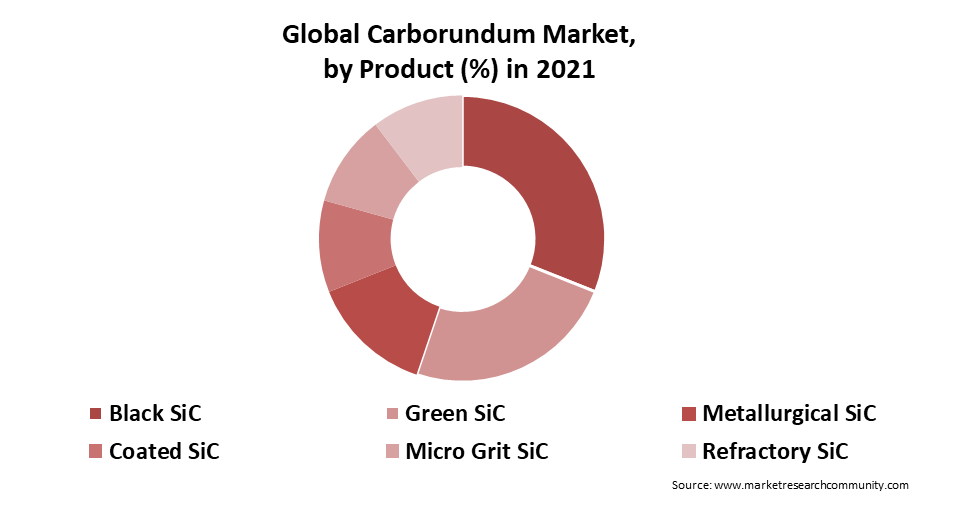 The application segment is divided into steel & energy, electronics & semiconductors, automotive, aerospace & defense, and fabrication. The electronics & semiconductors segment is expected to contribute the largest share of over 26.7% during the forecast period. The factors such as high-frequency operation, greater bandgap, and chemical stability are expected to support the growth of the electronics & semiconductors segment. Furthermore, the aerospace & defense segment is also projected to contribute the second largest revenue share to the growth of the carborundum market due to rising demand for carborundum products in the development of jet turbine blades for reduced fuel intake, high resistance to oxidation and corrosion combined with ease of 3D printing the aerospace parts such as the high-strength titanium alloy bracket which was used on-board of the Atlantic Bird 7 telecoms satellite.

The regional segment includes Asia Pacific, Europe, North America, the Middle East, and Africa, Latin America. In 2021, Asia Pacific is expected to contribute the largest share of over 59.9% during the forecast period. The factors such as rising demand for carborundum as a deoxidizing agent and an additive for the production of clean steel combined with the large presence of major steel-producing industries, especially in China, India, South Korea, and Japan are projected to accelerate the carborundum market in Asia Pacific region.

Europe is also expected to register the fastest CAGR growth during the forecast period owing to the factors such as the high purchasing power of the population, favorable government initiatives, and increased rate of industrialization is anticipated to boost the carborundum market growth in the European region.

What is the size of Carborundum Market?

Which region dominated growth of market?

Asia Pacific is expected to contribute the largest share of the market.

What is the dominant market driving factor?

The wide applicability of carborundum as raw material in multiple refractory applications such as furnaces.

The Black SiC are anticipated to contribute the largest share to the product segment.