D-mannose has wide application in nutraceutical, pharmaceutical, food & beverage, cosmetics & personal care, and animal nutrition industries. It is used as a nutritional supplement for the treatment and prevention of urinary tract infections. In the pharmaceutical industry, it is used as an ingredient for the synthesis of drugs. In the food & beverage industry, it is used as a food additive acting as a flavoring agent. Owing to its moisturizing and anti-aging properties, d-mannose is also used in the cosmetics & personal care industry to strengthen the moisture barrier for preventing water loss in the skin. Moreover, in the animal nutrition industry, d-mannose is used across poultry and pet care applications. Therefore, the above-mentioned facts have contributed to fueling the demand for D mannose among these industries globally in terms of value sales.

How much is the D Mannose Market worth ?

D mannose plays a significant role as a prebiotic because it prevents the body from diseases by stimulating the growth of good bacteria in the digestive system. The rising awareness of gut health, and the increase in diseases such as constipation, bloating, and other urinary tract-related concerns are driving the demand for supplementary diets.

For instance, according to the recent data published by the National Institute of Diabetes and Digestive and Kidney Diseases (NIH), in 2021, problems associated with constipation were common among all ages and populations in the U.S. About 16 out of 100 adults in the U.S. have symptoms of constipation. Moreover, about 33 out of 100 adults aged 60 and older in the U.S. have symptoms of constipation. Furthermore, according to the report published by the U.S. National Center for Biotechnology Information, functional constipation is a prevalent condition in children at the global level.

D mannose contains naturally inherent sugar that is produced utilizing environment-friendly biomass hydrolysates or wood-based. It’s mostly utilized as an effective dietary supplement for the treatment of urinary tract health (UTI). Furthermore, it is employed in cosmetics and personal care applications due to its humectant properties such as anti-aging, anti-inflammatory, and moisturizing actions. However, D mannose does not provide a speedy response. Thus, the use of antibiotics to eliminate infections swiftly and effectively is predicted to limit D-mannose sales to some amount.

The various measures adopted by countries across the world included strict lockdown measures, social distancing norms, and supply chain disruption caused delays in the production of D mannose, which in turn, impacted the global d-mannose market. Furthermore, in 2020, several industries, including cosmetics, personal care, and other industries registered a decline in production activities.

For instance, according to the Cosmetics Toiletries and Perfumery Association (CTPA), a European cosmetics and personal care association, in the year 2019, the global sales of cosmetics and personal care were Euro9.29 billion (USD 10.4 billion), and in the year 2020, it was Euro 8.71 billion (USD9.9 billion), with a decline of 6.2%. Thus, the decline in the above-mentioned industries negatively impacted global D mannose market growth. 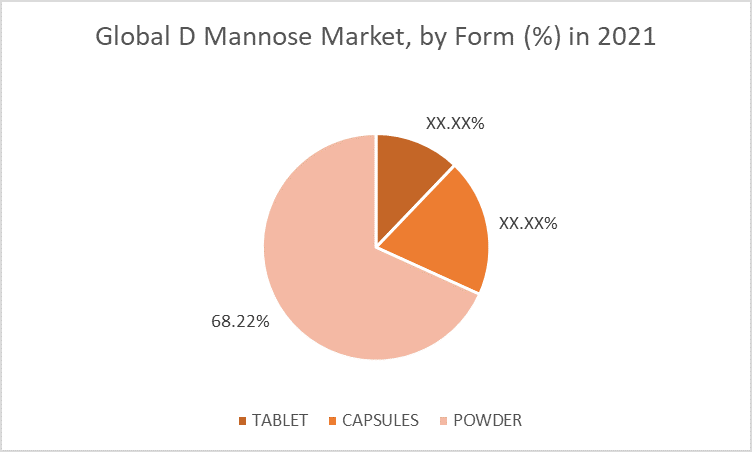 The application segment is divided into dietary supplements, pharmaceutical, food & beverages and others.

The dietary supplements segment is expected to contribute the largest share of over 32.78% in 2021 because unlike other forms of sugar such as sucrose and fructose, D-mannose doesn’t inhibit the circulation of the blood sugar as only minimum amounts of D mannose are metabolized. Further, the food & beverages segment is also anticipated to contribute to the D Mannose market. D-mannose is a sugar related to glucose. It is used as a sweetener, in sports nutrition and as dietary supplements. D-mannose is available in the form of capsules and are prescribed to be used as sports nutrition. It nourishes the healthy flora that colonizes the urinary tract membranes and keeps the urinary tract in balance. 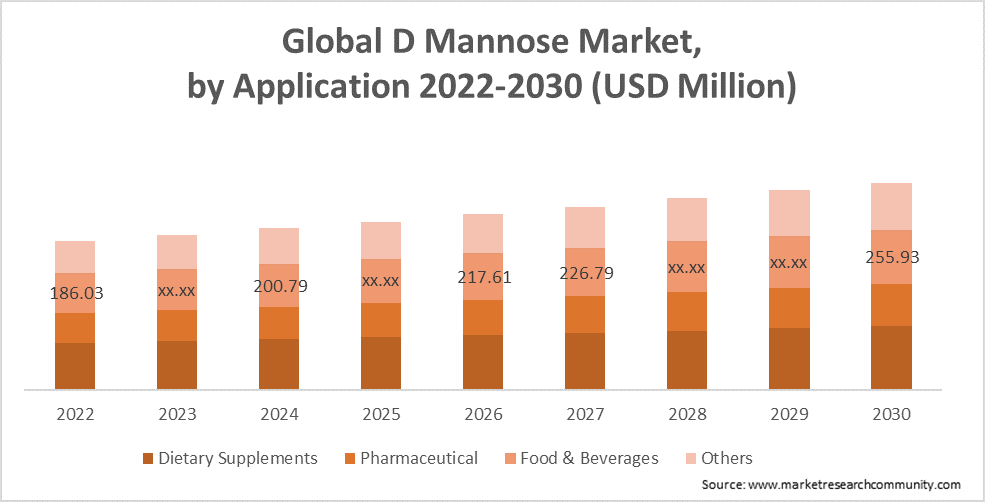 The regional segment includes North America, Europe, Asia Pacific, the Middle East, and Africa, Latin America. In 2021, North America is projected to contribute the largest revenue share of over 226.77 million during the forecast period. This market is projected to grow in the region, during the forecast period owing to the rise in demand in various end-use industries such as pharmaceutical, food & beverages, cosmetics, dietary supplements, and other industries.

The Asia Pacific region is expected to witness substantial growth during the forecast period. D Mannose is naturally found in sunflowers, soybean oils, avocados, almonds, wheat germ oils, and fruits such as peaches, oranges among others. It is used to treat deficiencies caused by genetics. According to an analysis by Globaldata, the Asia-Pacific region recorded the biggest increase in genetic disorders related trials between 2010 and 2020. Hence, the use of D Mannose in inherited disorders treatment is anticipated to fuel the market growth in the region.