Defoamer, also called an anti-foaming agent, is a chemical compound that breaks or suppresses the foam generated during industrial processes. A good defoamer has surface active properties and low viscosity that help the defoamer to spread rapidly on the foam surface and has an affinity to the air-liquid surfaces. Increased production capacity and reduced wastage of food & beverages are spurring the market growth of the defoamer. The foam generated during the processing causes malfunctioning of the equipment and increases the amount of wastage by producing a large quantity of foam in food and beverage products. The defoamer helps in eliminating the risks and thereby improves the production capacity and overall efficiency of the plant. Furthermore, changing lifestyle and increasing disposable income is boosting the market growth of the food and beverage industry which in turn drives the demand for the defoamers. The continuous economic development in various countries including India, China, and Brazil among others is leading the increased disposable income. The rise in income is influencing the buying pattern and people are opting for convenience food such as juices, soft drinks, processed cheese, and meats among others. This is resulting in the increased demand for defoamers in the food & beverage processing industries.

How much is the Defoamer Market worth ?

Furthermore, formation of foams also tends to negatively impact the meat quality and increases process timings. For instance, the EMULTROL DFM OLV-55 FG, a vegetable-oil based defoamer by Concentrol Chemical Solutions is specifically designed for use in meat processing operations. This in turn is fueling the adoption of defoamers in the meat and poultry processing industry. Also, during the rendering process of inedible by-products of poultry, defoamers are added to control the foam formation and for reducing the fouling of the equipment. Moreover, several companies are manufacturing defoamers specifically for egg processing facilities. For instance, Egg-Shellent defoamer by Birko Company specializes in reducing foam formation up to 8 inches during the egg washing process.

Rising global meat consumption is considered to be another key factor that is boosting the demand for defoamers. According to the Food & Agriculture Organization (FAO) it is estimated that by 2050 the production of animal products will be driven greatly by income and population growth. Globally, the poultry industry is expected to be at 41% while the shares of other animal-based products are lower: beef (20%), pig meat (34%), and sheep meat (5%). Therefore, the rising global population is anticipated to increase meat consumption by one-third over the forecasted period.

The Silicone-based Defoamers segment is anticipated to contribute the largest revenue share of over USD 1,791.56 million in the year 2025 during the forecast period. Silicon-based defoamers are a mixture of the defoaming agent based on silicon and specialty surfactant. The deformer has low toxicity & surface tension and contains polysiloxanes as the primary active material. For instance, Polydimethylsiloxane is an effective defoamer due to its properties including low surface tension, thermal stability, chemical inertness, and water solubility among others. Key driving factors of the silicone-based defoamer include easy to use, odorless, and safe handling.  The inert nature of the silicon defoamer makes it nontoxic that helps the manufacturer in the safe handling of the defoamer. Also, the high solubility of the silicon deformer makes it easy to use in industries. Additionally, the Oil Based Defoamers segment is expected to grow at a CAGR of over 5.6% during the forecast period. The oil-based defoamers are used in the food and beverage industry that include vegetable oil, mineral oil, and silicon oil. The vegetable oil used as a defoamer consist of canola oil, corn oil, soy oil, and sunflower oil among others. Vegetable oil is derived from fruits and seeds of plants which makes them safer to use. Silicon oil has an inert nature which is incorporated for a wide range of industries including food & beverage. 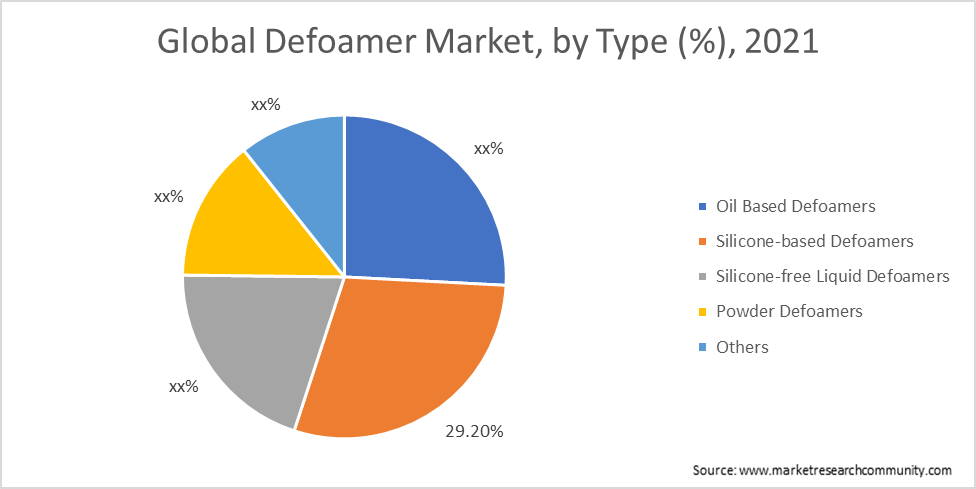 The end-user segment is divided into Pulping and Papermaking, Oil and Gas, Paints and Coatings, Food and Beverages, Water and Waste Water, and Others. 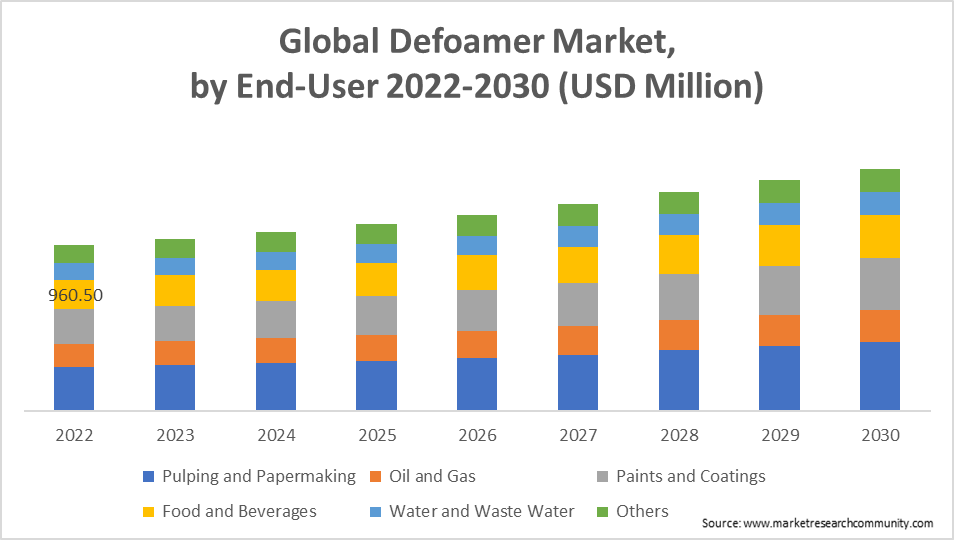 The regional segment includes North America, Europe, Asia Pacific, the Middle East and Africa, and Latin America. In 2021, North America is considered to contribute the largest revenue share of 1,800.22 million. North America has the world’s largest food & beverage manufacturers such as Coca Cola, Pepsi Co. and Kraft Heinz among others that have a global presence. The companies have to come across by-products such as form formation during the processing of the food and beverage products. This results in the reduced efficiency of the production plant and the increased wastage. Defoamer when used in food and beverage processing plants help in reducing the foam formation. Factors including increasing adoption of technology in processing, food preferences, convenience, and food safety among others are driving the market growth of the defoamers across the North America region.

The Asia Pacific region is anticipated to witness substantial growth during the forecast period with a CAGR of 5.4%. Some of the major companies in food & beverage market of Asia Pacific includes Nissin Foods Holdings, Lee Kum Kee, Amul, and Foods & Inns among others. Factors such as high population is spurring demand for food and beverages which in turn drive the market growth of the defoamer in Asia Pacific. Moreover, the growing income in emerging economies of Asia Pacific is leading to the increased demand for processed food which in turn drives the increasing demand for defoamers in the industry.

The competitive landscape of the market has been analyzed in the report, along with the detailed profiles of the major players operating in the industry. Further, the surge in Research and Development (R&D), product innovation, various business strategies, and application launches have accelerated the growth of the Global Defoamer Market. Key players in the market include-