AdBlue is a non-hazardous diesel exhaust fluid that aids in the reduction of air pollution released from heavy vehicle engines. The air pollution released from automobile vehicles, especially heavy and off-road vehicles due to the absence of Adblue in selective catalytic reduction technology in the engines is harmful majorly for the aged and pediatric population. For instance, the World Health Organization reported that over 4.2 million global premature deaths are caused due to outdoor air pollution, especially black carbon (BC). Thus, favorable regulations for increased usage of the Adblue in the automobile sector are expected to boost the market growth during the forecast period owing to the aid in reduced air pollution caused by vehicle.

Additionally, rising awareness of global warming and climate change is expected to boost the demand of the Adblue due to the reduced exhaust emissions of harmful greenhouse gases such as methane (CH4), carbon dioxide (CO2), nitrous oxide (N2O), and fluorinated gases. For instance, in 2018, According to the US Environmental Protection Agency (EPA), the transportation sector is responsible for over 29% of the global greenhouse gases released emissions. Thus, the stringent imposition of regulations by government organizations for the reduction of high emission levels of such harmful gases is estimated to contribute to the market growth. In the context of the region, Europe is anticipated to contribute a significant share to the growth of the AdBlue market. The factors such as the growing use of AdBlue in increasing numbers of heavy and off-road vehicles and growing expenditure from key industry players for the facilitation of clean and innovative products are projected to boost the market growth in the European region.

AdBlue, also defined as the diesel exhaust fluid (DEF), is an aqueous solution that comprises 67.5 percent deionized water and 32.5 percent urea with a major application in the automotive industry such as reduction in the number of air pollutants produced by diesel engines. Additionally, the fluid is sold under the name of ARLA 32 and AUS 32 in which the dehydrogenated ethanol is incorporated with AdBlue in the selective catalytic reduction (SCR) technology to fulfill the rigorous nitrogen oxide requirements of heavy truck motors and off-road engines.

The increased adoption of diesel exhaust fluid (AdBlue) into automobile vehicles combined with strict government rules and regulations in terms of greenhouse gas emissions through vehicle exhausts are the major factors that boost the AdBlue market growth due to the rising usage of commercial vehicles. Furthermore, the rising consumer awareness in terms of air pollution caused due to harmful emissions from heavy vehicles and increased adoption by automakers to provide Adblue integrated selective catalytic reduction technology in vehicle engines accelerate the market growth during the forecast period.

The scope of producing clean alternatives such as hybrid selective non-catalytic reduction (SNCR) to the conventional selective catalytic reduction (SCR) system are expected to create lucrative opportunities for the industry growth owing to the reduction of nitrogen oxide released through vehicle emissions. Additionally, the increased expenditures on research and development in terms of lowering the costs of such systems are also anticipated to create profitable opportunities for the market growth during the projected period.

The AdBlue industry has been significantly impacted due to the COVID-19 pandemic in many different parts of the world. The factors such as the collapsed oil prices, disruptive supply chains, reduced exports of coal for fuel production, and economic slowdown is the major impacts of COVID-19 which hampered the market growth. Shipments were impacted during the initial lockdown due to stringent government lockdown regulations and the closure of a manufacturing facility which led to the decline, especially in the automotive industry. However, the circumstances have stabilized and as a result, it is determined that COVID-19’s overall impact on the industry is moderate. Post covid-19, there was a positive impact on the market growth due to the rising numbers of vehicles among the population.

The type segment is separated into packaging, equipment, and others. The packaging segment is anticipated to contribute the largest share to the growth of the AdBlue market. The factors such as the increased expenditure on product innovation by major market players, low costs of product supply, and increased protective measures for prevention of freezing of the fluid are estimated to support the growth of the packaging segment during the forecast period. Furthermore, the equipment segment is also expected to register the fastest CAGR growth owing to the proper maintenance of product content weight, increased fuel efficiency in terms of lower carbon emission, and favorable adoption by the automakers. 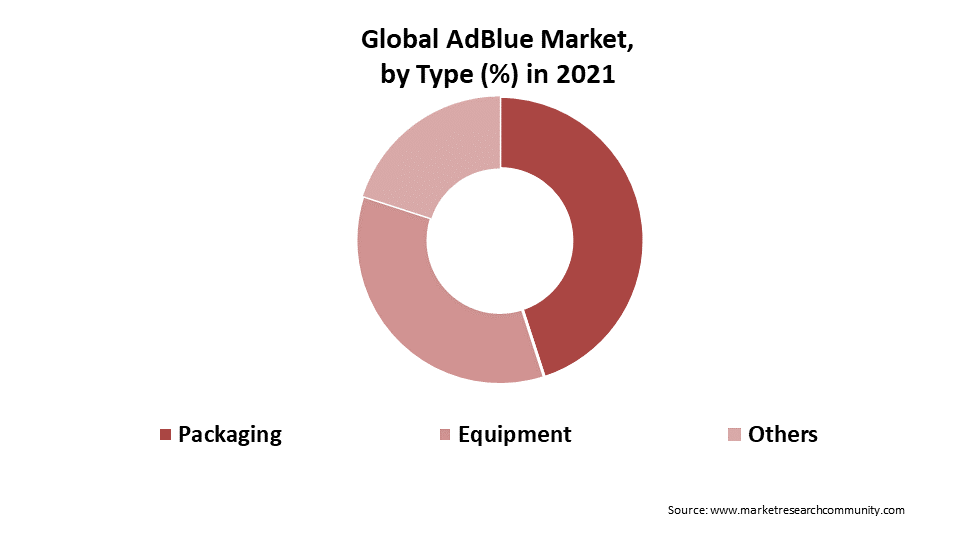 The application segment is categorized into commercial vehicles, cars, passenger vehicles, non-road mobile machines, railways, and others. The cars and passenger vehicles segment accounted for the largest share of the growth of the AdBlue market statistics. The factors such as increased awareness among the population in terms of rising usage of AdBlue for reduced harmful gas emissions from vehicles combined with favorable government rules and regulations are expected to fuel the growth of the market growth during the forecast period owing to the increased adoption of AdBlue by automakers. Commercial vehicles are also anticipated to witness substantial growth during the projected period due to the large availability of vehicle options to the consumers, increased funding solutions in terms of the loan for the purchase of the new commercial vehicle, and the growing need for large goods transportation.

The regional segment includes Asia Pacific, Europe, North America, the Middle East, and Africa, Latin America. In 2021, Europe is expected to contribute the largest share to the growth of the AdBlue market size. The factors such as increased expenditure on research and development in the automotive industry, high purchasing power, and rising adoption of environmentally friendly solutions like AdBlue or diesel exhaust fluid (DEF) due to favorable environmental regulations in automobiles are anticipated to fuel the market growth in the European region.

North America is also anticipated to register the fastest growth in terms of volume and value during the forecast period. The factors such as the rising demand for the DEF in light, medium, and heavy-duty passenger automobiles, on-road vehicles, and non-road mobile machinery industries such as manufacturing, agriculture, mining equipment, and forestry combined with growing awareness of the negative impacts of fuel combustion are estimated to fuel the industry size in the North American region.