How much is the Feller Bunchers Market worth ?

The feller bunchers are widely used for forestry logging applications to extract timber from forests, owing to factors such as high efficiency, high seed, cost-effectiveness, and several others. In the construction industry, timber is used in the construction of both small and large buildings, along with making doors, windows, and so on. The key factors driving the demand for timber in the construction industry are lightweight, better thermal insulation, and superior strength, thus fueling the demand for feller bunchers for cutting timber trees. In addition, the feller bunchers are also widely used to clear the land for construction projects, which is anticipated to be another factor that is positively impacting the market growth.

Furthermore, the surge in trend toward fire-resistant building construction materials is driving the demand for mass timber in the construction sector. In addition, the mass timber is also considered to withstand earthquakes, hence it is widely used in buildings across earthquake-prone regions such as Japan, California, China, and several others. Moreover, the timber-constructed buildings are considered to be more sustainable as compared to the buildings constructed from the traditional materials. For instance, according to Architecture 2030, a non-profit organization, buildings tend to generate approximately 40% of global CO2 emissions annually, out of which 28% is due to the building operations and 11% is due to traditional building materials. On the contrary, in the buildings constructed from timber, the carbon is majorly sequestered within the structure, which reduces the negative impact of the construction of the greenhouse gas emissions. This is considered to be one of the key factors driving the demand for mass timber, in turn fueling the adoption of feller bunchers.

Additionally, the use of timber in the construction sector also increases the life of buildings, as the ability to absorb the moisture content is below 20% in the timber, thus reducing the risk of fungal or mold growth in the structures.  Therefore, owing to the aforementioned factors, timber is widely used in the construction industry. According to the Mass Timber Report by FOREST BUSINESS NETWORK LLC, in 2019 estimated 78 buildings in the United States were constructed using timber, accounting for approximately 4 million square feet of space. The report projects the number of mass timber buildings to double every two years, resulting in demand for 12.9 billion board feet of timber in the U.S. alone by 2034. Similarly, according to the Wood Products Council, around 600 commercial timber buildings were built in the U.S. and as of December 2021, the number has doubled to 1,303 projects constructed or in the construction phase.

Deforestation is most defined as a decrease in forest areas due to activities such as urbanization, logging, mining, agriculture, and several others. Deforestation is considered one of the major environmental challenges faced globally. According to the Food and Agriculture Organization of the United Nations, as of 2020, the area of primary forests worldwide has been reduced by more than 80 million hectares. Similarly, according to Worldwide Forum’s Living Planet report, the present levels of deforestation are anticipated to make the species living in rainforests the most endangered. Agriculture and logging for fuel and wood are considered to be the key factors driving deforestation globally. Therefore, several governments worldwide are implementing regulations and forming partnerships to reduce deforestation.

For instance, at the UN’s Climate Change Conference- COP26 held in October-November 2021, approximately 100 countries committed to halt and reverse deforestation by 2030. Similarly, in November 2021, the EU proposed regulation for deforestation-free products, requiring domestic operators and importers to ensure that products free from deforestation are sold in the EU market. Furthermore, the rising use of recycled timber is also anticipated to restrain the market growth. Timber wood recycling involves tailoring timber that has been used in the past. The use of recycled timber for furniture making is considered to be one of the most environmentally friendly forms of manufacturing.

The application segment is divided into Forestry Logging, Building and Maintaining Forestry Roads, Mill yard and Land Management, and Others. 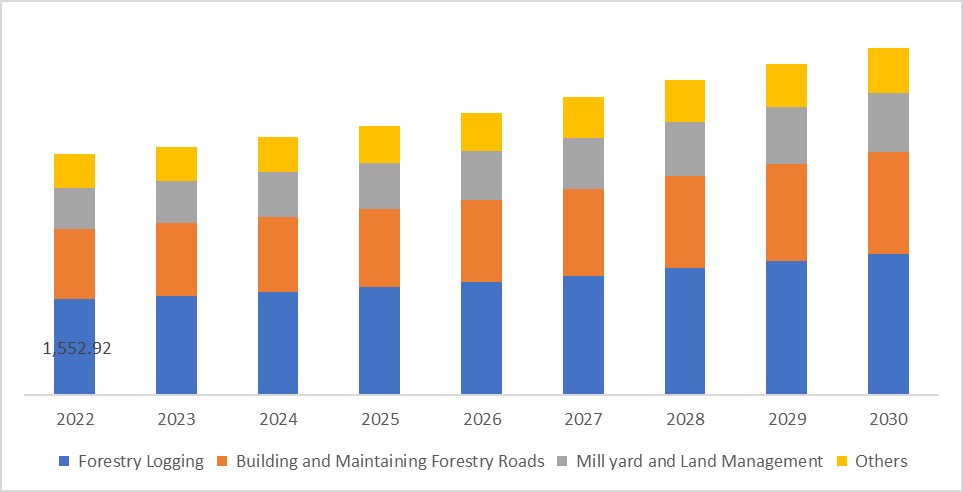 The regional segment includes North America, Europe, Asia Pacific, the Middle East and Africa, and Latin America. In 2021, North America is considered to contribute the largest revenue share of USD 1,652.09 million. The North American region is considered to one of the leading producer and exporter of timber globally, owing to presence of vast coniferous forests in the region. For instance, according to the Food and Agriculture Organization (FAO), the forest cover in U.S. and Canada is approximately 310 million hectares and 347 million hectors. In addition, the region is dominated with presence of some of the largest timberland companies globally including Sierra Pacific Industries, Weyerheauser, Potlatch, Green Diamond Resource, Rayonier, and several others. This is one of the key factors driving the demand for feller bunchers across the region. Furthermore, the United States is one of the leading consumers of pulp and paper products globally. For instance, according to the Food and Agriculture Organization (FAO), the U.S. accounted for consumption of approximately 63.6 million metric tons of paper board and paper in 2020. Moreover, the feller bunchers are considered to be safe equipment as compared to other types of forestry equipment. According to the National Institute for Occupational Safety and Health, the use of feller bunchers has reduced the injury rates in the logging industry.

The Asia Pacific region is anticipated to witness substantial growth during the forecast period with a CAGR of 5.5%. The increasing use of wood as a construction material in countries such as Japan and China is anticipated to boost the market growth of feller bunchers.  Additionally, the surge in trend towards green buildings in the region is also expected to enhance the use of feller bunchers in construction projects in APAC. According to the World Economic Forum data 2021, Asia accounts for around 50% of the global emissions and this trend is expected to continue with more construction activities. Thus, to reduce the greenhouse emissions, major countries across the region are expected to adopt the model of green buildings which is increasing the utilization of timber and wood in various projects. Moreover, a significant rise in construction projects in the region is attributed to be one of the key factors fueling the market growth. For instance, on 28th September 2021, Shibaura 1 Chome Project was started in Tokyo, Japan. The project will replace Hamamatsucho Building with two new towers of 235-meter height.

The competitive landscape of the market has been analyzed in the report, along with the detailed profiles of the major players operating in the industry. Further, the surge in Research and Development (R&D), product innovation, various business strategies, and application launches have accelerated the growth of the Global Feller Bunchers Market. Key players in the market include-