The fuel deposit control agents are those which are added to the fuels either at the refinery stage or in the fuel distribution system. The petroleum-based fuel has been used since a long time to power industrial machineries, airplanes, automotive vehicles, and marine vehicles. The fuel control deposit agents that are added to the at refinery itself include octane and cetane enhancing additives, cold flow improvers, stability improvers, metal deactivators, and so on. The fuel additives are added to the fuels mainly to enhance the quality of fuels in order to improve the engine performance. They play a crucial role in preventing the building up of sludge and several other types of deposits such as gums and sediments in the fuels.

How much is the Fuel Deposit Control Agents Market worth ?

The deposits formed around the valve and injectors has adverse effect on the engine exhaust emissions. Emissions are generally referred as the exhaust pollutants including unburned hydrocarbons, mixed oxides of nitrogen, carbon monoxide, and others which negatively affect the engines majorly diesel engines, due to deteriorating combustion quality. The formation of unsolicited deposits is one of the major causes of such deterioration in the combustion quality and effective additive treatment to prevent deposit formation thus provides a major environmental benefit. The emission of these exhaust pollutant can be reduced through the improvement of fuel economy and effective additive treatment thus, providing a major benefit to the environment. Governments across the globe are imposing stringent environmental rules & regulations in order to address the growing concern regarding the harmful effect of the exhaust pollutant. For instance, The Environmental Protection Agency (EPA) in the U.S. has introduced various norms to reduce vehicular emissions as well as enhancing the efficiency & quality of the fuels used in vehicles.

An electric vehicle is an electric, environmentally friendly vehicle that runs on an electric motor instead of a heat engine which requires fuel and gasses. Hence, many consumers are replacing their automobiles in order to address the issue of pollution, global warming and others. Factors such as increase in fuel prices, carbon emissions, air pollution and others have resulted in fueling the demand for the battery electric vehicle globally. Increasing demand for electric vehicles across the globe, rising preference towards technology from automotive industry, and decreased price of li-ion battery have negatively affected the market growth of the traditional vehicle globally.

The various measures adopted by countries across the world included strict The Covid 2019 pandemic has created both a public health and economic crisis globally. The impact was worse than the great depression of the 1930s and the global budgetary crisis of 2008. The global shutdown affected all industries globally. The travel industry collapsed which resulted in the loss of livelihood of people dependent on tourism.

Further, the slowdown in manufacturing resulted in heavy losses to the countries dependent on the energy supply market. The demand for fuel dropped drastically due to global shutdowns. The transportation industry was reduced, and vehicles were used only to meet the daily demands for consumable items. The limited number of vehicles on road resulted in reduced demand for fuel additives for vehicles.

The product type segment is divided into Amides, Amines and Di-amines, and Organo-Metallic Compounds, Sulphonates and Alcohols, Azo-Compounds, Polysiloxane based compounds, Carrier Oils, EVA, and Others.

By type, polyisobutylene succinimides, one of the type of amides is accounted for the largest market share in the year 2021 ad is also expected to be the fastest growing amides type during the forecast period. This is attributable to the fact that polyisobutylene succinimides is one of the important fuel deposit control agents that helps in increasing fuel efficiency by mitigating the formulation of shoot in the fuels such as diesel and petrol and reduces the deposit formation on the metal surfaces. Moreover, it also added to fuels in order to reduce the maintenance cost of the engines.

By Amines & Di -Amines subsegment, Polyether amine accounted for the largest market share with a revenue generation of USD 258.85 million in the year 2021 and is expected to the fastest growing segment with the CAR of 4.7% during the forecast period. This is attributable to the fact that polyether amine has ability to increase the wear & tear life of the engines by providing lubrication to the engine parts. It also helps in reducing the emissions and improving efficiency of the engines, by enhancing the combustion characteristics of the engines. 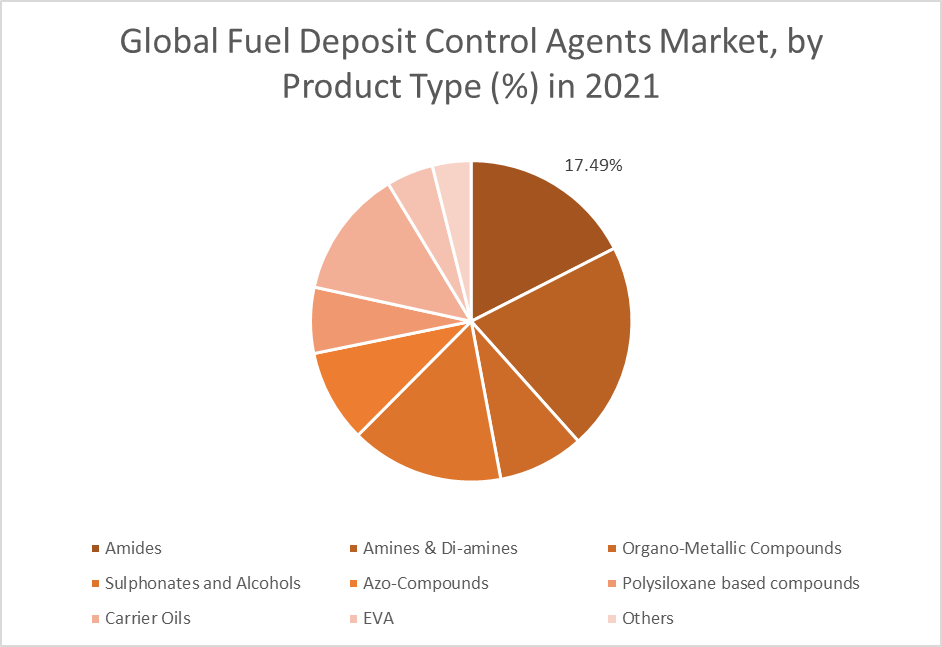 The end-use segment is divided into Diesel, Gasoline, Aviation Fuel, and Others.

The diesel segment accounted for the highest market share in the fuels deposit control agents’ market and expected to grow at a significant rate during the forecast period. The fuel deposit control agents play a vital role in stabilizing the fuels including diesel. Moreover, diesel corrodes over the time and destroy the parts of the engines which in turn has boosted the demand for corrosion additives in the diesel. This in turn has propelled the use of deposit control agents for diesel fuels, which in turn in fueling the overall market growth. However, the aviation fuel segment is expected to be the fastest growing segment during the forecast period.

The regional segment includes North America, Europe, Asia Pacific, the Middle East, and Africa, Latin America. By Region, Asia-Pacific accounted for the largest market share in the year 2021 and is also expected to be the fastest growing region in the fuel deposit control agent market during the forecast period. The proliferation of automobile industry, aviation industry has driven the growth of fuel additives such as deposit control additives in the market. Moreover, the high economic growth in the emerging countries such as India, China and others in this region is contributing to the increasing demand for fuel which in turn has also driven the demand for fuel deposit control agent in the market. Additionally, the enormous growth of the industrial production increased trade along with the rising number of vehicles on the road are the key factor contributing to the growth of the fuel deposit control agent market.

The competitive landscape of the market has been analyzed in the report, along with the detailed profiles of the major players operating in the industry. Further, the surge in Research and Development (R&D), product innovation, various business strategies, and Application launches have accelerated the growth of the Global Fuel Deposit Control Agents market. Key players in the market include-