Gallium nitride (GaN) substrates offer good uniformity, excellent crystallinity, and superior surface quality with few dislocations. They have lower cooling requirements and offer improved energy efficiency, faster speeds, and high-power density. Additionally, GaN substrates offer high electrical and thermal conductivity with lower weight and smaller dimensions. These features of GaN substrates are some of the key determinants increasing their usage in various end-user industries such as automotive, consumer electronics, aerospace, IT & telecommunication, and among others.

How much is the Gallium Nitride (GaN) Substrates Market worth ?

According to the International Energy Agency (IEA), the global deployment of LEDs witnessed significant progress in 2021 as compared to 2020. For instance, various countries across the world started phasing out incandescent lamps and replacing them with LEDs as the main lighting technology. According to IEA, currently, more than 50% of the global lighting market makes use of LED technology. Additionally, in June 2020, the New York Power Authority entered in a partnership with Signify, a global manufacturer of lighting solutions, in order to support Smart Street Lighting NY. The program aims at replacing around half a million lights throughout the state with energy-efficient LED lights by 2025.

The type segment is divided into GaN on Sapphire, GaN on Si, GaN on GaN, GaN on Diamond, and others. The GaN on Sapphire segment is anticipated to contribute the largest revenue share of over USD 1,864.08 million in the year 2025 during the forecast period. GaN on sapphire substrates offer higher breakdown voltage and improved performance at high temperatures. Hence, GaN on sapphire substrates are primarily used in radio energy amplification, optoelectronics, high power devices, and LED applications. The rising adoption of LEDs by multiple industries including automotive, electronics, and healthcare along with increasing demand for LED display panels, CSP LEDs, and other similar factors are further driving the demand for GaN on sapphire substrates. Additionally, the GaN on Si segment is expected to grow at a CAGR of over 11.9% during the forecast period. GaN on Si are mainly employed in multiple applications including high power digital-to-analog converters (DACs), transmitters, drives, and more utilized in the electric vehicle, telecommunication, consumer electronics, and other industrial sectors. In 2021, Ford invested USD 11 billion in order to develop new electric vehicle facilities in the U.S. with the aim of increasing its electric vehicle production. The development of the new facilities is scheduled to be completed by 2025. Hence, an increase in electric vehicle production will drive the demand for GaN on Si substrates for use in multiple applications involving power devices for high power control in inverters installed in electric vehicles. 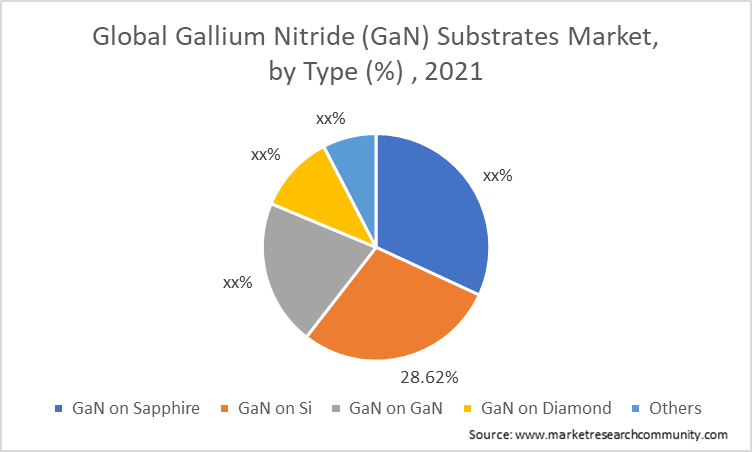 The application segment is divided into Transistors, Lasers, LEDs, RF devices, and Others.

The LEDs segment is expected to account for largest share of approximately 30.33% in 2021 due to the ability of Gallium Nitride Substrates to produce different colored light when exposed to an electric current. High heat capacity, high thermal conductivity, improved optical quality, and functionality are some of the major factors driving the demand for GaN substrates for use in LED application. According to the Consumer Technology Association (CTA), smartphone shipment is estimated to be valued at USD 74.7 billion by the end of 2022, representing a growth of 3% in comparison to 2021. Furthermore, in November 2020, Porotech launched its first LED product based on gallium nitride for use in the electronics industry. Hence, the surging growth of the consumer electronic sectors is anticipated to positively impact the market during the forecast period. 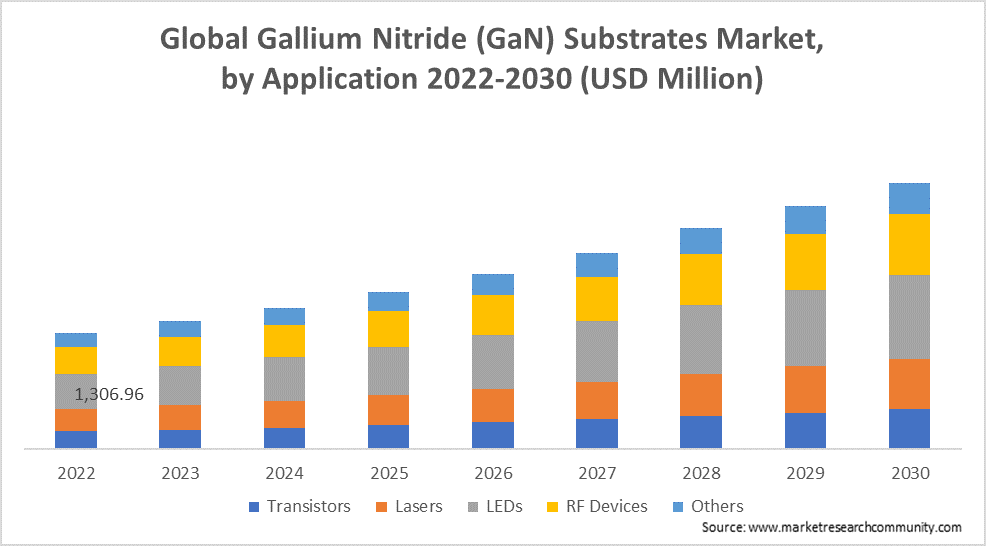 The regional segment includes North America, Europe, Asia Pacific, the Middle East and Africa, and Latin America. In 2021, North America is considered to contribute the largest revenue share of 1,351.79 million. The market in the North America region is projected to grow owing to the rise in number of companies associated with autonomous vehicle manufacturing. The emergence of autonomous cars and electric propulsion systems in the automotive sector has been a prevailing factor for the growth of the market in the region.

The Asia Pacific region is anticipated to witness substantial growth during the forecast period with a CAGR of 12.1%. The rapid pace of industrialization, development, and globalization is creating lucrative opportunities for the growth of the market in the region. Moreover, the growth of multiple industries in the Asia-Pacific region such as electronics, automobiles, and others, is fostering the market growth for GaN substrates. Factors such as the increasing development of new technologies in the electronics sector, rise in disposable income, and surging penetration of smartphones, laptops, and other consumer devices with advanced features in Asia-Pacific are some of the key aspects driving the growth of the electronics sector in the region.

The competitive landscape of the market has been analyzed in the report, along with the detailed profiles of the major players operating in the industry. Further, the surge in Research and Development (R&D), product innovation, various business strategies, and application launches have accelerated the growth of the Global Gallium Nitride (GaN) Substrates Market. Key players in the market include-