The Global Choline Chloride Market was evaluated USD 428.6 million in 2021 and is expected to rise with a CAGR of 3.8% from 2022- 2030 during the forecast period. Choline chloride has the formula [(CH3)3NCH2CH2OH]Cl and is an organic compound. It contains quaternary ammonium salt and alcohol and is hence referred to as bifunctional. The choline present is the cation that occurs naturally.

Choline chloride is a water-soluble salt of white colour mainly used in feed as it accelerates growth. It does not have adverse effects on animal and consumer health. Choline chloride is generally deemed as Vitamin B4, belonging to the Vitamin B group. It reduces the risk of fatty liver, especially in chickens, and protects the liver from toxins. Choline chloride is an important composition of lecithinum, acetylcholine, and phosphatidylcholine. Choline chloride is used as a special feeding supplement and is anticipated to witness significant growth during the foreseeable period in the coming years.

How much is the Choline Chloride Market worth ?

Increasing animal feed production coupled with rising consumption of poultry meat globally is anticipated to drive the market growth during the forecasted period. The Animal feed segment consists of Ruminant feed, Swine feed, Poultry feed. Choline chloride is used to stabilize clay in the oil & gas industry due to its economical & safe properties. The demand for quality poultry meat products is driving the growth of poultry meat production which in turn increases the demand for choline chloride in animal feed.

Increasing awareness for feed supplements among the end-users coupled with strict government regulations to increase the use of choline in feed is anticipated to drive the market growth. The number of increasing infectious diseases in livestock animals has increased awareness amongst consumers to consume food that is rich in supplements. Due to increase in awareness, the manufacturers of animal feed are obligatory to provide feed with additives which acts as growth promoters in livestock animals. Choline salts are used in foods and supplements to deliver nutritionally significant amounts of choline which are relative to current dietary recommendations, according to Good Manufacturing Practices (GMP). Choline is a vital feed additive for swine, cattle and poultry, primarily as choline chloride. It is used as a premix or is used directly in the feed or water provided to livestock animals. It has been currently allowed as a livestock vitamin.

Another factor propelling meat consumption and livestock production is urbanization as it substantially impacts the food consumption patterns and meticulously drive towards the demand of livestock production. Furthermore, there is a demand for feed additives in order to promote healthy living in animals. Healthier the livestock the product prepared will be of better quality. The market is expected to grow at a significant rate owing to the rise in demand for feed additive in diet of livestock animals to enhance their growth.

The Global Choline Chloride Market grew at a substantial rate prior to the outbreak of the Covid-19 pandemic as choline chloride is an important additive in animal feed. Choline is denoted as Vitamin B4 and aids in the prevention of conditions such as perosis and liver enlargement in chickens. The outbreak of the pandemic halted the supply chains completely which impacted the animal feed choline chloride market to a great extent. The emergence of COVID-19 pandemic impacted the eating habits of the majority of the population and people focused more on vegetarian diets compared to non-vegetarian food. Disruptions in the supply chain impacted the movement of the finished product and reduced the interest of a larger population in consuming meat and other forms of non-vegetarian food, which impacted the animal feed grade Global choline chloride market.

Post-Covid Global choline chloride market has potentially grown during the forecast period. The closure of restaurants globally for a brief period of time since the lockdown badly affected the feed industry. The supply has been deeply hit by the emergence of the pandemic while the demand for animal feed has been relatively stable. The Global choline chloride market witnessed an increase in demand during the second half of 2021 owing to ease in restrictions imposed by countries and regularizing the production and supply chains It is anticipated that the market for animal feed grade choline chloride would witness remarkable growth during the forecast period owing to the rise in the movement of products from one place to another. Such factors will further boost the demand for Global Choline Chloride Market.

Global choline chloride market is bifurcated by Form, Grade, Application, and Region. By form the market is bifurcated into Powder, Liquid. Market by Grade is bifurcated into 50%, 60%, 70%, 75% and others. choline chloride market by Application is segmented into Animal Feed, Oil & Gas, Human Nutrition, Personal Care, Pharmaceuticals and others. Animal Feed further segmented into Ruminant, Swine and Poultry. The report also covers the market size and forecasts for the Global Choline Chloride Market in 26 countries across major regions.

Market Research Community provides extensive analysis of the size, share , major trends in each sub-segment of the Global Choline Chloride Market, along with forecasts at the global, regional and country level from 2022-2030.

The Liquid segment accounted for a market revenue USD 250.10 Million during the year 2021 of the Choline Chloride in the Global Choline Chloride Market. Choline chloride is available as a liquid that acts as a useful feed ingredient. It is available as a colourless light-yellow liquid. It is also available in various percentages such as 70%, and 75% based on their purity. Choline chloride available in 70-75% is highly concentrated and is of the utmost quality.

The segment 70% by grade accounted for a market revenue of USD 128.6 Million during the year 2021 of the Global Choline Chloride Market. This segment anticipate for the concentration of choline in choline chloride. 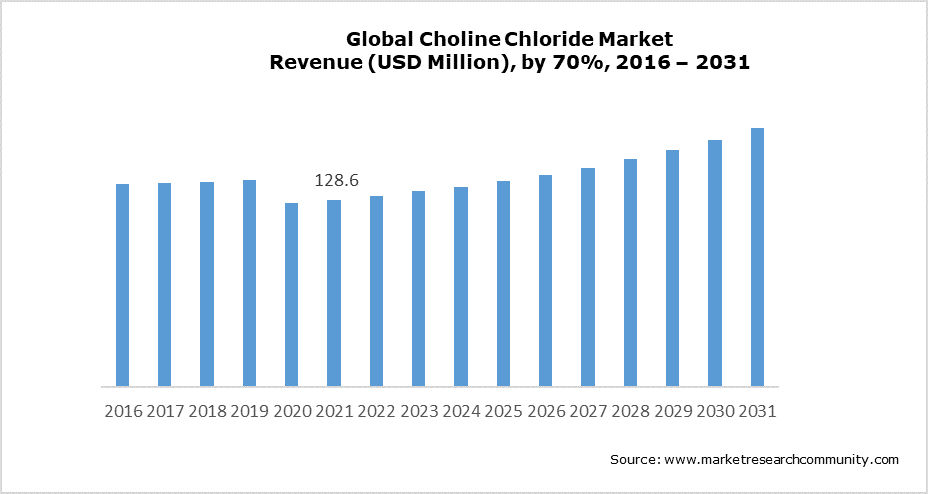 The percentage of choline chloride at 70% is of utmost quality and is highly used in preparation of superior quality feed. Several European and North American laws abide the usage of 70% choline chloride in feed as it enhances growth in livestock and improves metabolism. Choline chloride with 70% concentration is has the dominant market share and is expected to show similar trends during the forecast period owing to its high quality.

The Animal feed Grade Choline Chloride Market is anticipated to grow during the forecast period 2022 to 2030. In Animal feed, poultry meat and eggs have high demand across the globe and this sector has high demand across the globe overall days of year, hence poultry feed contributes more in global choline chloride market. It is a vital feed additive especially for chickens as it accelerates growth.

Poultry is expected to have increased consumer demand and production in the coming years because it is the most broadly available organic meat in the United States and the increase in demand for products of poultry among consumers and the rising emphasis on improving poultry health are expected to accelerate the market for choline chloride during the forecast period.

Asia Pacific is anticipated to boost demand of choline chloride where China witnessed growth in livestock industry. The industry is growing rapidly and expanded in recent years as diets focused more on animal protein. China is the largest manufacturer of animal feed and world’s largest producer of livestock products.

China is one of the top shale gas suppliers in the World. This caused a massive demand for the country’s choline chloride market which created huge demand for hydraulic fracturing. The animal feed market is growing rapidly. This huge market can grow to massive market demand in the country of Choline Chloride Market.

Global Choline Chloride Market study is moderately competitive, with a considerable number of global and regional players. The key strategies adopted by these firms product innovations, include expansions, and mergers and acquisitions. The market is anticipated to be moderately fragmented.

The industry has players dominating the market such as BASF SE, Balchem Corporation, Eastman Chemical Company, and other players. Product innovation for the product is low to moderate. The supply-demand gap for the market is expected to be moderate owing to its major use in agrochemicals and also the presence of major players.