The favorable government initiatives for the promotion of clean and environment friendly alternatives such as e-bikes to the conventional vehicles is estimated to witness a significant boost during the forecast period. For instance, the “2019 Case for a UK Incentive for E-bikes” report assesses the grant schemes conducted in multiple countries and emphasizes that European grants of worth over EUR 250 are effective for the electric bike purchase encouragement among the population. Thus, favorable government schemes are expected to boost the usage of E-bike among large population.

How much is the E-Bike Market worth ?

Moreover, rising expenditure in research and development of innovative product such as cloud-connected e-bike is expected to attract the huge customer base owing to the increased adoption of technological advancements. For instance, according the research and development expenditure data published by the World Bank in June 2022 estimates that the global expenditures initiated by the private and public ventures is expected to contribute 2.6% of the global GDP. Thus, the increased spending on introduction of innovative features such as anti-theft systems and cloud-based connection of the bike is estimated to contribute to the growth of the e-bike market statistics. In the context of the region, Europe is anticipated to contribute a substantial share to the market growth. The factors such as the growing use of electric bike for easy daily commute owing to the increased adoption among population, favorable government expenditures in terms of grants and schemes and large presence of key industry players are projected to boost the market growth in the European region.

An electric bike, or e-bike, is referred to as the bicycle equipped with an electric bike motor for assisting the user in pedaling the bike. The motor mounted on the e-bike receives the power input from a rechargeable battery combined with other components such as additional battery pack, motor and display screens especially in premium variants.

The increased government initiatives and support in terms of promoting the electric vehicles combined with rising consumer preference for electric bikes as daily commute alternatives are the major factors that boost the e-bike market size. Furthermore, the rising adoption of e-bikes for multiple applications such as the logistics and electric bike rental services and augmented expenditure on development of new electric modes of transport by automotive industry also accelerate the market growth during the forecast period.

The overdependence on major industry players located on different sides of the world for the imports and exports of electric bikes restricts the industry growth due to the international trade policies combined with the uncertain political relationships between respective countries. Additionally, the high cost of e-bikes also hinders the large adoption among population owing to the differences in income levels and availability of the products especially in developing countries such as Africa, Brazil, and Argentina.

The scope of utilizing electric bikes for daily commute as a replacement of conventional cars is expected to create lucrative opportunities for the growth of e-bike industry owing to the low costs as compared to the cars and unrequired need of driving license. Additionally, the increased expenditures on research and development in terms of lowering the costs of such systems and introduction of cloud-based connected e-bikes with the features such as integrated navigation, emergency calls, anti-theft system, social media connection and remote diagnostics is also anticipated to create profitable opportunities for the market growth during the projected period.

The e-bike industry has been positively impacted due to the COVID-19 pandemic in many different parts of the world. The factors such as the increased adoption of e-bikes for daily commute due to the public transport restrictions, high awareness among population in terms of active lifestyle and sudden shift towards electric vehicles due to the reduced crude oil imports the major impacts of COVID-19 which facilitated the market growth. However, the electric bike shipments were impacted during the initial lockdown due to stringent government lockdown regulations and the closure of a manufacturing facility. Nevertheless, the circumstances have stabilized and as a result, it is determined that COVID-19’s overall impact on the industry is moderate. Post covid-19, there was a positive impact on the market growth due to the high adoption among population owing to the daily commute to the opened workplaces.

The type segment is bifurcated into throttle mode, and pedal assisted bike. The pedal assisted bike segment is anticipated to contribute the largest share to the growth of the e-bike market size. The factors such as increased convenience of travelling through uneven terrains, rising use as a resistance training exercise owing to the controlled power and precision of riding the bicycle and availability of three to five modes for the assistance in propulsion are estimated to support the growth of the pedal assisted bike segment during the forecast period. Furthermore, the throttle mode segment is also expected to register the fastest CAGR growth of over 14.5% owing to the high acceleration and speed response, great choice for driving through the busy traffic with minimal assistance and easy convenience of travel especially to compromised health population. 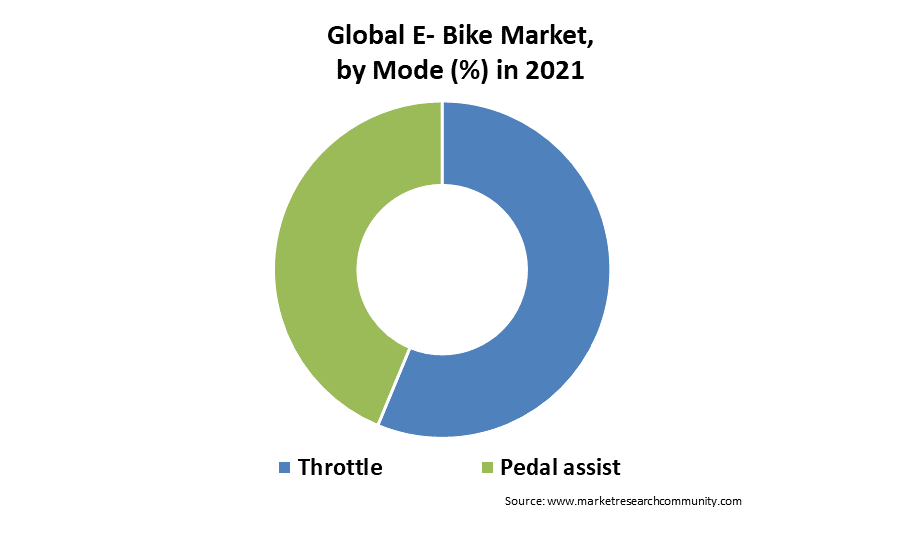 The battery type segment is separated into lithium ion battery, lead- acid battery, and others. The lead- acid battery segment is projected to contribute the largest share of over 55% to the growth of the e-bike market share. The factors such as inexpensiveness, improved usage of durable technology for longer commute and high performance irrespective of the low and high temperature differences in the motor are estimated to support the growth of the lead- acid battery segment during the forecast period. Additionally, the lithium ion battery segment is also expected to register the substantial growth with the fastest CAGR rate of over 13.1% owing to the high performance and charge density, reduced weight, and improved charging-discharging efficiency.

The application segment is categorized into city/ urban, cargo, and mountain/ trekking. The mountain/ trekking segment is also estimated to contribute over 49.8% share to the market growth during the projected period. The factors such as the increased coverage of large travel range by electric bikes especially in remote areas such as mountains and trekking trails, availability of lightweight mountain bikes for improved stability control over uneven terrains and growing customer preference for exploring the adventurous activities such as hill walk or climb, camping, and hiking with usage of e-bikes for reaching the difficult destinations with and ease are anticipated to contribute to support the growth of mountain/trekking segment. Additionally, the city/urban segment is also anticipated to register the fastest CAGR growth during the projected period. The factors such as increased awareness among the population in terms of rising usage of electric bikes for navigating through the traffic congestion and noise pollution on the busy urban roads, combined with the easy convenience of reaching the destinations within city limits with reduced efforts and rising construction of separate bike lanes in major countries such as Germany, Netherlands and France are expected to support the growth of city/urban segment.

The sales channel is divided into retail distribution, and direct sale. The retail distribution segment is estimated to contribute the largest share contribution to the market growth owing to the increased availability of multiple products at negotiable prices, augmented reach to the targeted customer base and enhanced logistics support. Moreover, direct sale segment is also estimated to support the market growth due to the customer flexibility over the product choice, increased saving of capital investments owing to the reduced need of leasing the retail shop and the ease of offering the customizations in multiple customer orders. Hence, the above-mentioned segments are anticipated to support the market growth during the forecast period.

The regional segment includes Asia Pacific, Europe, North America, the Middle East, and Africa, Latin America. In 2021, Asia-Pacific is expected to contribute the largest share to the market growth. The factors such as increased expenditure on research and development in the bicycle infrastructure especially in China and Japan, high purchasing power, and rising adoption of environmentally friendly solutions like electric bikes due to stringent government regulations in terms of carbon emissions are anticipated to fuel the growth of the market growth in the Asia Pacific region.

Europe is also expected to register the fastest growth in terms of value and volume during the forecast period owing to the large presence of major industry players, high disposable income among population and favorable government spending on the adoption of clean alternatives such as electric bikes for decreasing the automotive carbon footprint are estimated to fuel the industry in the European region.

What is the valuation of E-Bike Market?

Asia-Pacific is expected to contributed the largest share of the market growth.

The increased government initiatives and support in terms of promoting the electric vehicles combined with rising consumer preference for electric bikes as daily commute alternatives.

Pedal Assisted Bike are anticipated to contribute the largest share to the type segment.