Multi GNSS receiver chips process the signals broadcasted by multiple GNSS satellites to provide accurate user location, velocity, and precise time data. It also enables accurate positioning tracking of the devices. The features of GNSS receiver chips such as simultaneous tracking of line-of-sight and multiple reflections from each satellite results in a significant improvement in its ability to mitigate urban multipath, thus, offering a smooth navigation experience. Furthermore, GNSS receiver chips also offer other features such as low power consumption, low PCB footprint, advanced LTE filtering, and jamming mitigation. These features of GNSS receiver chips are some of the key determinants increasing their usage in various end-users such as automotive, consumer electronics, aviation, and other industries.

How much is the Multi GNSS Receiver Chips Market worth ?

The factors such as increasing disposable income, rapid pace of industrialization, advancement in autonomous driving systems, surging penetration of smartphones, laptops, and other consumer devices along with the growth of the aviation sector are some of the key factors driving the growth of the market. In January 2022, STMicroelectronics launched its new GNSS receiver chip that can integrate a triple-band positioning measurement as well as data associated with standard multi-band position-velocity-time and dead-reckoning. The chip is designed with the latest GNSS innovations. The chip is primarily developed for use in the automotive sector for the delivery of high-quality position data. Further, in 2021, Broadcom launched BCM4778, which is a GNSS receiver chip that is primarily designed for use in smartphones, tablets, and other consumer devices. Thus, the surging developments associated with multi GNSS receiver chips for use in automotive, electronics, and other industrial sectors will further drive the growth of the market in the upcoming years.

The overall cost of GNSS receiver chips is primarily dependent on the cost of production, followed by the cost of raw materials such as copper, aluminium, and more used in the manufacturing of GNSS chips. As a result, fluctuations in the prices of raw materials can hinder the growth of the market.

Additionally, the fluctuating prices of crude oil have resulted in higher transportation costs of raw materials, logistics, and more, which is causing significant disruption in the supply chain. This is further expected to affect the cost of materials used in the production of GNSS receiver chips. For instance, Brent crude prices surged up to USD 139 per barrel in 2022. In April 2020, Crude Oil Basket (COB) in India reached up to USD 19.90 per barrel, which is considered to be the lowest record since 2002. During the first 11 months of the year 2020-21, the average annual price of India’s COB amounted to USD 42.72 per barrel, which again decreased by 30% more than the average COB price in 2019-20. In addition to this, the COB increased significantly by 35% from its initial budget estimate as per revised estimates for 2020-21. Hence, the volatility in the prices of raw materials including copper, aluminium, and other materials that are used in the production of GNSS receiver chips impacts the overall pricing of these chips. This, in turn, is restraining the growth of the market.

COVID-19 created an impact on the demand for multi GNSS receiver chips across various industrial sectors including automotive, consumer electronics, aviation, and other industries. Moreover, a slight decline in sales was witnessed, owing to the impact on the supply chain management system. Factors such as lack of transportation facilities and closure of major ports, owing to unavailability of workers have resulted in declined sales during the first two quarters of the year 2021.

The COVID-19 pandemic and rise in cases have forced the governments to shut their borders and cancel the trade with neighboring nations. In addition, an internal lockdown within the states was declared, resulting in restrictions on movements. Meanwhile, a decline of 16% in the automobile industry was also witnessed during the period. In relation to the automotive industry, the use of multi GNSS receiver chips had drastically reduced as the automotive sector is one the significant end user of the market. The impact can be assessed based on factors such as reduced demand for cars and restrictions on outdoor movement. Accordingly, it can be identified that a major decline in multi GNSS receiver chips was witnessed in this industry.

The type segment is divided into GPS/GNSS Receiver Chip and GPS/GNSS Receiver Module. The GPS/GNSS Receiver Module segment is projected to contribute the largest revenue share of over USD 3,939.40 million in the year 2028 during the forecast period. GPS/GNSS receiver modules are high-performance, self-contained receivers that are mainly designed for use in navigation, positioning, and tracking applications. These modules can acquire and track multiple satellite constellations or channels simultaneously with high position accuracy even at the lowest signal levels. Moreover, the benefits of GPS/GNSS receiver modules such as compact and lightweight design, minimal power consumption, delivery of highly accurate positions and integration of advanced interference mitigation, and anti-jamming technology are some of the key factors driving its adoption in the automotive, electronics, and aviation sectors.

Additionally, GPS/GNSS modules are mainly utilized in the automotive sector for various applications involving in-vehicle infotainment, navigation, telematics boxes, digital video recorders, and advanced driver assistance systems. Factors such as the surging production from the global automotive and electronics sectors are anticipated to drive the demand for GPS/GNSS modules, which in turn, will boost the market growth in the upcoming years. 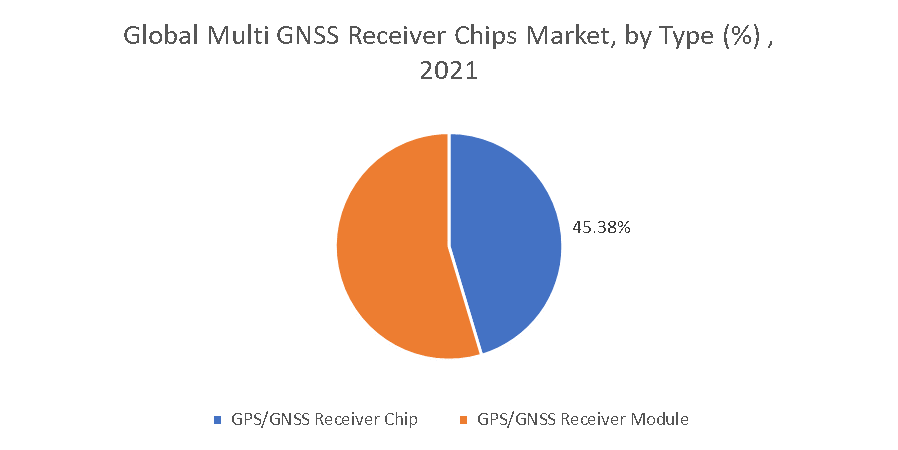 The End-Users segment is divided into automotive, consumer electronics, aviation, other end-user industries.

The regional segment includes North America, Europe, Asia Pacific, the Middle East, and Africa, Latin America. In 2021, Asia-Pacific is accounted to contribute largest revenue of USD 1,764.61 million. The market is projected to grow in the region, during the forecast period owing to rapid pace of industrialization, development, and globalization is creating lucrative opportunities for the growth of the market in the region. Moreover, the growth of multiple industries in the Asia-Pacific region such as electronics, automobiles, and others, is fostering the market growth for multi GNSS receiver chips.

According to the Ministry of Industry and Information Technology of China, the electronic manufacturing sector in China was valued at USD 2.2 trillion in 2021, representing a significant growth of 14.7% year-on-year. Meanwhile, according to Invest India, the electronics industry in India was valued at USD 118 billion in 2021, with domestic electronic production reaching up to USD 9.9 billion. Furthermore, South Korea’s smartphone market is large and includes numerous enterprises. Among these, Samsung is the most important smartphone manufacturer in South Korea, which conducts IC design, smartphones, and printed circuit boards (PCB) manufacturing.

The competitive landscape of the market has been analyzed in the report, along with the detailed profiles of the major players operating in the industry. Further, the surge in Research and Development (R&D), product innovation, various business strategies, and Application launches have accelerated the growth of the Multi GNSS Receiver Chips market. Key players in the market include-