Organic Edible Oil Market size is projected to be worth USD 171.7 Billion by 2028, registering a CAGR of 7.3% during the forecast period (2022-2028), the market was valued at USD 95.7 Billion in 2021. Soybean oil exhibit a clear dominance in the type segment as the large amount of soybean crop produced, organic soybean oil is the most widely consumed oil on the planet. Supermarkets and hypermarkets are expected to dominate the market due to increased consumer reliance on such stores for grocery shopping as a result of attractive shelf arrangements, discount offers, and home delivery services.

Organic edible oil is derived from plants or herbs that were grown or processed in accordance with organic principles. The manufacturing process eliminates the need for synthetic substances, which improves the quality of organic oil. Organic oil’s market is driven by consumer awareness of its health benefits. It is widely used in the beauty and cosmetic industries. Oils are high in essential fatty acids, which are beneficial for maintaining skin function, making skin healthier, and treating a variety of problems.

How much is the Organic Edible Oil Market worth ?

The growing demand for organic edible oil due to rising consumer health concerns, which is propelling the edible oil market forward. Further, rising demand for edible oils with low calorie, cholesterol, and fat content is estimated to lift the growth of the market.

The processing cost of edible oil has been a restraining factor in the edible oils market. As a result, the price of edible oil rises in general, and consumers are less likely to buy it when compared to other edible oils. This is more visible in low-income regions than in developed regions.

The growing use of edible oil in pharmaceuticals, as well as increased public initiatives related to health and fitness, are driving the market forward. Consumer awareness of the health benefits of edible oil is increasing the pressure on market players to innovate in order to stay competitive. Further, consumer awareness in terms of numerous benefits associated with edible oil’s in cosmetics and personal care sectors. is driving the demand. Moreover, due to rise in Internet culture, it is now easier to find information on homemade remedies for skin conditions and personal care. As a result, for homemade personal care products, consumers are turning to medicinally beneficial oils such as olive oil and walnut oil. This factor is primarily responsible for the increase in demand for native edible oil.

The type segment is divided into soybean oil, olive oil, coconut oil, and others. Soybean oil exhibit a clear dominance in the market as they provide several benefits over other types of organic edible oil. As, the large amount of soybean crop produced, organic soybean oil is the most widely consumed oil on the planet. The widespread availability of the raw material, soybean, is expected to enhance product growth. Organic soybean oil’s high emulsification and lubrication properties are expected to boost product sales. 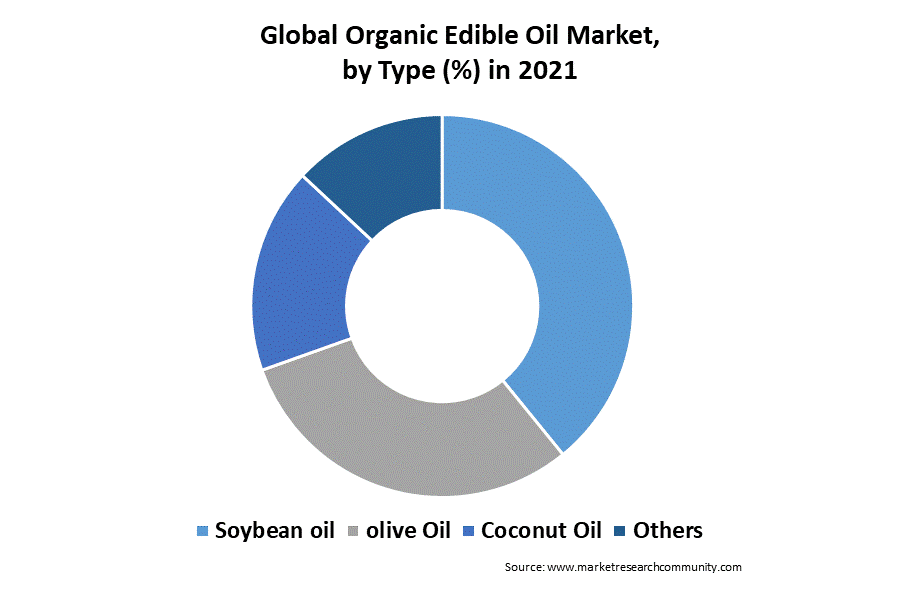 The End-Use segment is categorized into residential and commercial. Residential customers dominate the market as organic oil is lower in fat than regular oil. As the population of obese and diabetic patients grows, so does the consumption of low-fat foods. Customers are more interested in healthy food products as they are concerned about their physical appearance and health. This factor is estimated to fuel the growth of the organic edible oil market. 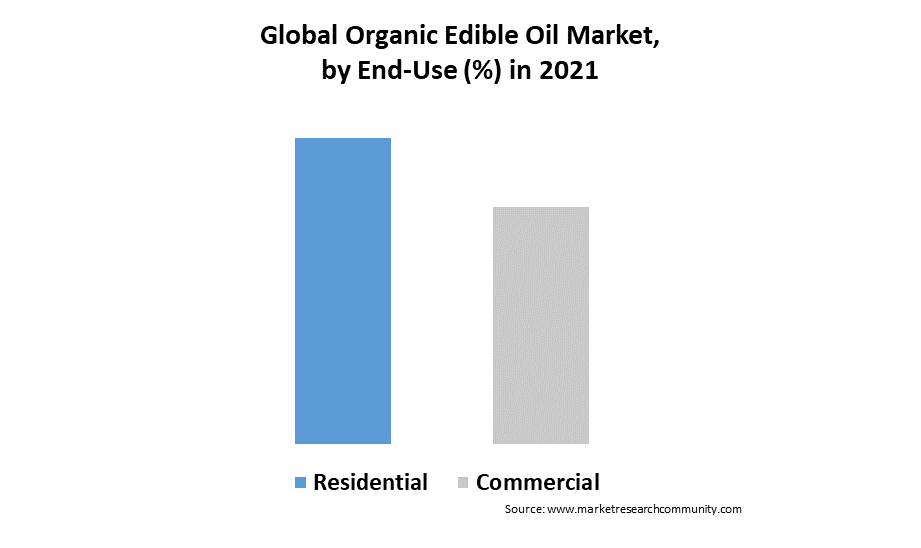 By distribution channel segment is categorized into supermarkets/hypermarkets, online retail stores, specialty stores, and others. Supermarkets and hypermarkets are expected to dominate the global organic edible oil market. The increased consumer reliance on such stores for grocery shopping as these stores are convenient, is expected to increase product sales.

The region segment is divided into Asia Pacific, Europe, North America, Middle East and Africa, Latin America. North America market is expected to account for the largest revenue share in the global market over the forecast period. The factors responsible for the  growth are increasing adoption of edible oil in the cosmetic industry. The Asia Pacific market is expected to grow faster in the coming years. The factors driving the growth of the edible oils market in the region are a growing population, rising disposable income, presence of key manufacturer. Further, increased awareness among individuals about the health benefits of edible oil usage have significantly boosted the demand of organic edible oil market.

The competitive landscape of the market has been analyzed in the report, along with the detailed profiles of the major players operating in the industry. Further, surge in Research and Development (R&D), product innovation, and various business strategies have accelerated the growth of the market. Some of these players in Organic Edible Oil Market are:

What is the size of Organic Edible Oil Market?

North America is expected to contributed the largest share of the market growth.

The growing demand for organic edible oil due to rising consumer health concerns.

Soybean Oil are anticipated to contribute the largest share to the type segment.