Smart Weapons Market is projected to be worth USD 26.42 Billion by 2028, registering a CAGR of 6.18 % CAGR during the forecast period (2022-2028), The market was valued at USD 16.35 Billion in 2021. The missiles segment is expected to dominate the product segment due to the rising demand for guided missiles from the defense sector. The land segment is projected to gain a high market share in the forecast period owing to the rapid expansion of military forces. Further, in terms of regional segment, North America has gained high market traction and is dominating the smart weapon market.

Smart weapons are equipped with a laser, television, or satellite guidance system and rely on external assistance and are distinguished from brilliant weapons, which are self-guided. Smart weapons include missiles, steerable bombs, and other weapons.

How much is the Smart Weapons Market worth ?

Increasing up-gradation in weapon technology and surging investment in defense across the globe is estimated to act as a major driver of the smart weapon market.

Regulation imposed by the government in various countries on the import and export of weapons is projected to hamper the growth of the smart weapon market.

Growing threats from international boundaries such as maritime boundary disputes and terrorism are anticipated to bring good opportunities for the smart weapons market.

The covid-19 pandemic has adverse impact on the market due to the imposition of stringent rules by the government such as global lockdowns, which disrupted the supply and demand of raw materials in various sectors. This factor resulted in a complete shutdown of smart weapon manufacturing facilities, which negatively impacted the growth of the market. Post covid-19 there was a positive impact on the smart weapons market as a result of the growing Russia-Ukraine war, terrorism, and expansion of military forces on a global level.

The product segment is divided into missiles, munitions, guided projectiles, guided rockets, and directed energy weapons. The missiles sub-segment is estimated to dominate the smart weapon market due to advancements in technology and an increase in military spending. Further, companies are working on the development of advanced surveillance systems to identify incoming threats within the home boundaries. These factors will improve the demand for missiles in the smart weapon market. 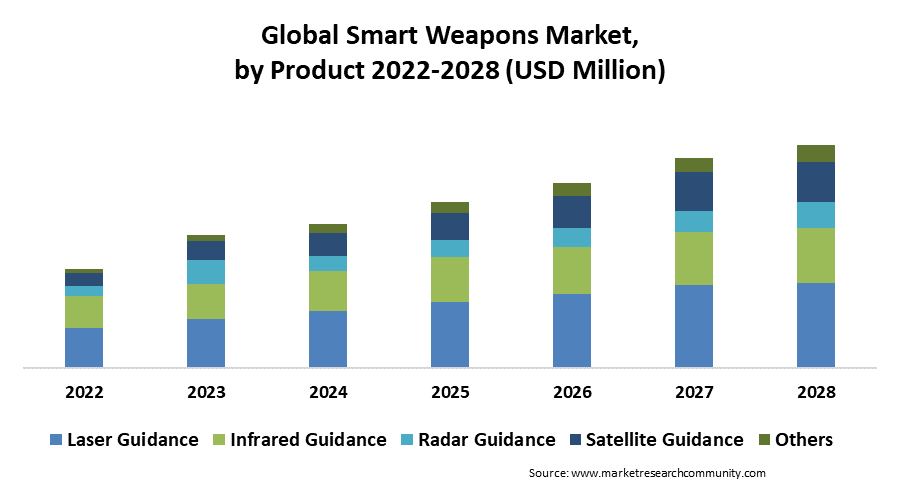 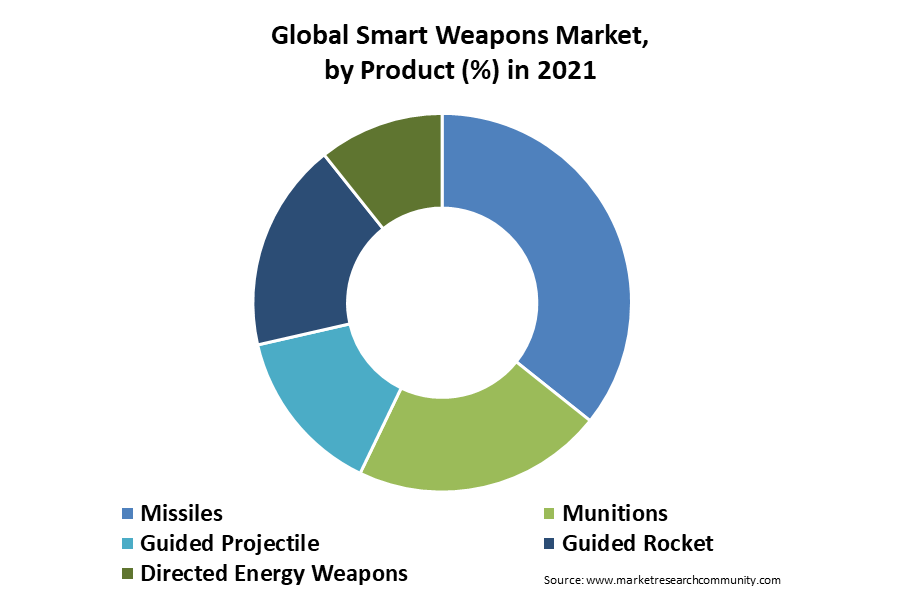 The platform segment is trifurcated into air, land, and naval. The land segment is the fastest-growing segment in the smart weapon market during the forecast period. The factor responsible for the growth of the market are rising investment in the defense sector, expansion of military forces, and growing procurement of smart weapons. For instance, CGI won four contracts with a total of USD 92.5 million to support four US. Army and Missile Command (AMCOM) programs to help safeguard the readiness of more than 90 major aviation and missile systems throughout their life cycles. Moreover, air and naval segments have considerable market share in the smart weapon market.

By Region, the smart weapons market is segmented into North America, Europe, Asia Pacific, the Middle East and Africa, and Latin America. North America is estimated to gain the highest market share during the forecast period. The region is responsible for the highest spending on defense, and military modernization programs. Further, the presence of key players such as Boeing Company, Lockheed Martin Corporation, and other is anticipated to fuel the growth of the market.

The competitive landscape of the market has been analyzed in the report, along with the detailed profiles of the major players operating in the industry. Major companies are focusing on market expansion strategies such as product launches, mergers & acquisitions, and expansion of manufacturing facilities to boost market presence.

How much is the Smart Weapons Market worth?

North America contributed the largest share of the market growth.

Increasing up-gradation in weapon technology and surging investment in defense across the globe is estimated to act as a major driver of the smart weapon market.

The missiles sub-segment is estimated to contribute the largest share to the product segment.