The increased demand for SMD shunt resistors as the major components of engine and battery production is estimated to augment the demand for resistors. For instance, according to the official Import and Export Data of India, over 128 shipments were recorded from major countries such as Germany, China, South Korea, and others owing to the increased demand from the automobile industry. Thus, the rising automobile applications in terms of controlled voltage management are expected to grab significant market attention during the forecast period.

How much is the SMD Shunt Resistor Market worth ?

Additionally, the wide adoption of solar system among population is anticipated to accelerate demand of SMD shunt resistors especially in solar inverters. For instance, the statistical data released by the Solar Energy Industries Association located in the U.S. emphasized that over USD 33 million were spent as an investment in the solar industry in 2021. Thus, growing demand for resistors in solar due to the increased need for safe and controlled management of high voltage in solar inverters is estimated to contribute to the SMD Shunt Resistor market growth. In the context of the region, Asia Pacific is projected to witness a significant growth rate during the forecast period. The growing need for SMD shunt resistors in major industries especially for effective manufacturing of electronic components, and growing expenditure from major industry players for facilitation of innovative products are projected to accelerate the market growth in the Asia Pacific region.

SMD (surface mount device) shunt resistors are low-resistance devices principally used to measure the flow of current in the circuit for various devices. The shunt resistors have a very low-temperature coefficient as a large current flow generates high heat and pose threat to the device’s productivity. Moreover, these resistors are manufactured from materials such as Manganin as their temperature coefficient is near zero.

The augmented application of resistors in the automotive sector for aspects such as engine cooling, electric power steering, battery power regulation, and others in the automotive sector fuel the growth of the market. Furthermore, the rising government initiatives for the promotion of solar systems for residential and commercial use combined with the enhanced power grids in terms of boosting connectivity between remote countries also accelerate the SMD shunt resistor market growth.

The risks associated with sudden voltage drops and improper dissipation of power in the shunt resistors restrict the industry growth owing to the uncertain nature of power distribution through resistors or transistors. Also, the unrequired use of galvanic isolation hampers the market growth due to the concerns related to the overload of the electric current flow through transformers.

The SMD shunt resistor industry has been significantly impacted due to the COVID-19 pandemic in many different parts of the world. The factors such as limited availability of raw materials, reduced material sourcing, and the lockdown restrictions imposed globally hindered the market growth during pandemic phase. The shipments were majorly impacted during the initial lockdown due to the disrupted supply chain of lithium-ion batteries and the closure of a manufacturing facility which led to the decline, especially in the automotive industry. However, the circumstances have stabilized and it is evaluated that the overall impact of COVID-19 on the industry is moderate. Additionally, post COVID-19 circumstances, there was a positive impact on the market growth due to the continued production of consumer electronics.

The type segment is divided into the metal alloy, metal foil, and film. The metal alloy segment is expected to dominate the growth of the type segment during the forecast period. The factors such as the low-temperature coefficient of resistivity of an alloy owing to the peak resistance at about 50°, the zero thermal electromagnetic force (EMF) in copper, and increased provision of robust technology through high surge capability are anticipated to support the growth of the metal alloy segment. Furthermore, the metal foil segment is also estimated to witness significant growth owing to the reduced risk of speed loss, stability, or accuracy, and improved compatibility with multiple product applications such as hybrid chips (wire-bondable chips), trimming potentiometers, voltage dividers and networks, and others.

The application segment is separated into automotive, telecommunication, consumer electronics, industrial, and others. The automotive industry is expected to contribute the largest share to the growth of the SMD shunt resistor market share. The factors such as the increased demand in the automotive industry due to the wide use of shunt resistors in electric vehicles, cars, commercial vehicles, two-wheelers, heavy vehicles, train engines, and avionics combined with augmented applicability in noise suppression, battery power regulation, and engine cooling are anticipated to support the automotive segment. Additionally, the consumer electronics segment is also estimated to contribute the largest share to the market growth owing to active voltage control in transistors, high resistance to the varying circuits’ temperatures, and wide usage of resistors in multiple products such as laptops, mobile phones and others. 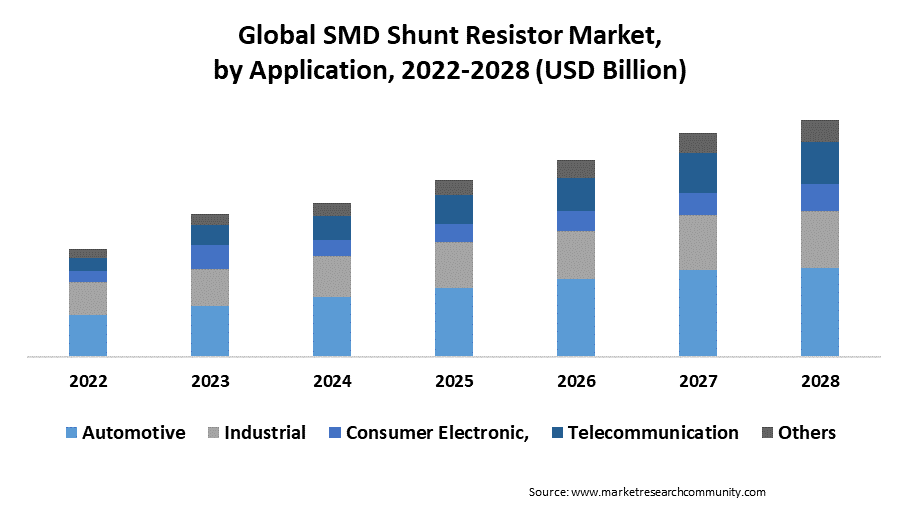 The regional segment includes North America, Europe, Asia Pacific, the Middle East, and Africa, Latin America. In 2021, Asia Pacific is estimated to contribute the largest share to the market growth. The factors such as increased demand for conductors, batteries, carbon fiber reinforced plastics, and electrodes coupled with the presence of resistor manufacturers, especially in India and China are anticipated to boost the SMD shunt resistor market growth in the Asia Pacific region.

Europe is estimated to register the fastest growth in terms of volume and value during the forecast period owing to the rising demand for SMD shunt resistors for growing usage of battery and electrical devices among consumers, the increased emphasis on the safety of multiple products such as vehicles, air conditioners, computers, and others coupled with the rising expenditures on the development of lithium-ion batteries for electric vehicles.

How much is the SMD Shunt Resistor Market worth?

The SMD Shunt Resistor Market is worth USD 1,649.1 billion.

Asia Pacific is estimated to contribute the largest share to the market growth.

Which is the leading application segment in this market?

Automotive industry is the leading application segment in this market.