Biosensors are transducers and a biological ingredient, such as an antibody, enzyme, or nucleic acid, forms the tool. The element works in conjunction with the transducer converting the biological reaction into an electrical signal and analyte being tested. Biosensors are also known as, optrodes, immunosensors, chemical canaries, resonant mirrors, biochips, biocomputers, and glucometers, depending on their use.

The biosensor market is mainly driven by the increasing demand for medical applications, such as a need for tiny diagnostic devices, a growing diabetes population, and quick technological improvements. Further, the demand for user-friendly, disposable, and cost-effective devices combined with quick response times has driven the growth of the biosensors market during the forecast period.

The biosensors market is expected to be restrained by stringent regulatory standards and complex reimbursement scenarios ratified in the global healthcare segment. Further, adjustment of newer technologies as per existing rules is time-consuming, hampering biosensor acceptance and limiting the global biosensors market’s progress.

Wearable biosensors are expected to create lucrative opportunities for the market owing to continuous monitoring of vital signs of premature infants, fitness buffs, athletes, and individuals in remote areas away from medical services.

The biosensors market has been severely impacted since the COVID-19 epidemic in many different parts of the world. Shipments were impacted during the initial lockdown due to a labor shortage and the closure of a manufacturing facility. The pandemic’s initial effects on China were tremendous. However, the nation’s circumstances have stabilized, and all product and service production rates have increased. As a result, it is determined that COVID-19’s overall impact on the biosensors market is moderate.

In 2021, the electrochemical sub-segment led the biosensors market, accounting for approximately 68.7% of total revenue. Owing to the widespread measurement and analytical application in biological and biochemical processes. These biosensors have a wide linear response range, low detection limits, excellent repeatability, and stability. Electrochemical detection beats thermal, piezoelectric, and optical detection in terms of market penetration and consumption. Some of the advantages are compatibility with new microfabrication technologies, robustness, freedom from sample turbidity, ease of operation, disability, cheap cost, and low power requirements. 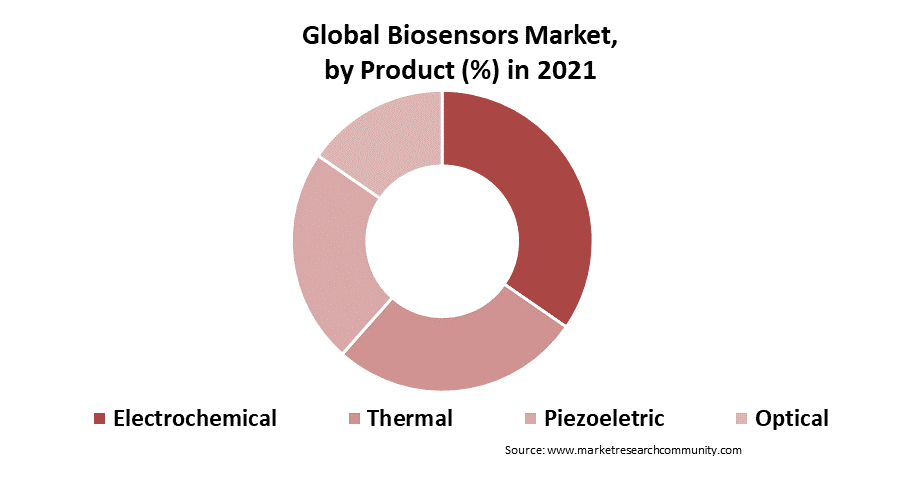 In 2021, the medical category ruled the market, accounting for around 66.9% of the biosensors market. In the medical industry, biosensors are utilized in cholesterol testing, blood glucose monitoring, blood gas analysis, pregnancy testing, drug discovery, and infectious illnesses. It is recognized as a critical tool for detecting and monitoring a wide range of medical conditions, including diabetes and cancer. The increased incidence of diabetes is a primary factor driving the segment’s rise in the biosensors market. A range of improved glucose biosensors has been created to assist diabetic patients in maintaining normal blood glucose levels.

In 2021, the point-of-care testing in the end-use segment held the largest market, accounting for nearly 49.2%. Advances in technology such as point-of-care applications for biosensors and ultrasensitive printables that help monitor or sense organic fluids such as urine, perspiration, blood, and saliva. The above-mentioned factor is the key driver responsible for the growth of biosensors in the PoC testing market. These devices give consumers quick and precise findings, allowing for early diagnosis and treatment. Growing R&D is resulting in the advance of next-generation point-of-care biosensors, such as localized surface plasmon resonance, improved spectroscopy techniques, and surface plasmon resonance, which are expected to boost the demand for the biosensors market. 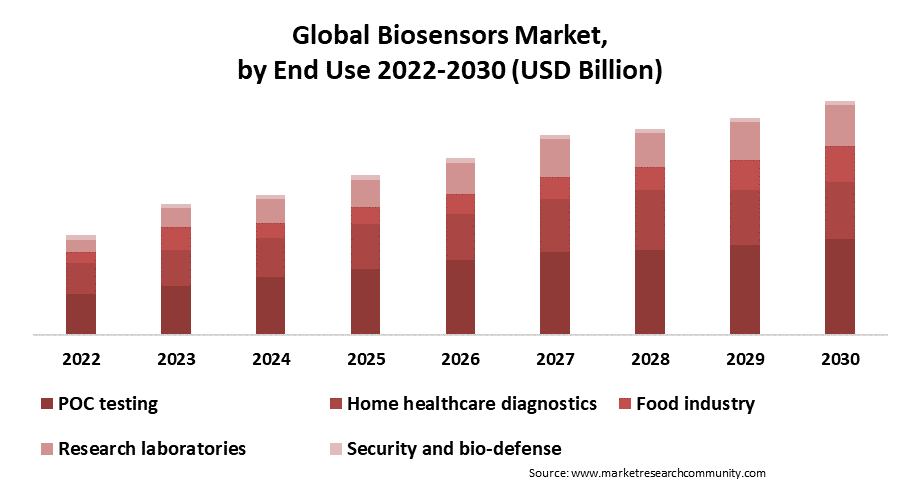 North America led the growth of the market with the greatest revenue share of 39.8%, owing to the existence of key companies and the growing incidence rate of targeted illnesses in the area, in 2021. Technological advancements such as the initiation of tiny diagnostic equipment that allows higher market saturation of Electronic Medical Records (EMR), and speedy and precise results, are predicted to boost the market expansion during the forecast period. Also, Clean Water Act, the Clean Air Act, and National Environmental Policy Act all occur in the US and are expected to generate significant development opportunities for the North American market.

The competitive landscape of the market has been analyzed in the report, along with the detailed profiles of the major players operating in the industry. Further, the surge in Research and Development (R&D), product innovation, various business strategies, and product launches have accelerated the growth of the Biosensors Market. Key players in the market include-