Fetal Bovine Serum Market was valued at USD 871.90 Million in 2021, registering a CAGR of 6.7% during the forecast period (2022-2030), and is projected to be worth USD 1,562.95 by 2030. The growing need for fetal bovine serum for research & development activities across a variety of areas, especially in the pharmaceutical and drug development arena, is one of the significant market factors contributing to the growth of the fetal bovine serum market. Along with this, the prevalence of acute and chronic disorders is expected to rise worldwide, and fetal bovine serum’s effectiveness is predicted to increase its uptake. This is expected to fuel the expansion of the global fetal bovine serum market throughout the forecast period.

Fetal Bovine Serum is produced using a closed collection system, typically at a slaughterhouse, from the blood of a fetus of a bovine. The serum is frequently added to the fundamental growth media in cell culture. The most popular type of serum is fetal bovine serum (FBS), which has a high concentration of elements that support embryonic growth. The serum has many advantages for cell culture, including macromolecular proteins, water-insoluble component transporters, such as nutrients with low molecular weights, and additional elements needed for the in vitro growth of cells, such as hormones and attachment factors.

The significant rise in the consumption of culture medium in emerging nations around the world is a major element influencing the growth and demand of the fetal bovine serum market. Additionally, it is projected that increased R&D efforts toward the development of novel biopharmaceuticals and the development of the biopharmaceutical industry are expected to fuel market expansion. Additionally, the market expansion is fueled by an increase in funding and investments for research initiatives in both developed and developing nations.

By application, the fetal bovine serum market is segmented into the pharmaceuticals sector was the largest revenue contributor, and is expected to grow significantly as a result of the increased adoption of biopharmaceuticals drugs and the rise in chronic diseases like cancer, arthritis, and cardiovascular disease around the world. These are the two most important factors predicting the market’s growth. Further, segments such as human & animal vaccines and others are expected to support the growth of the fetal bovine serum market. 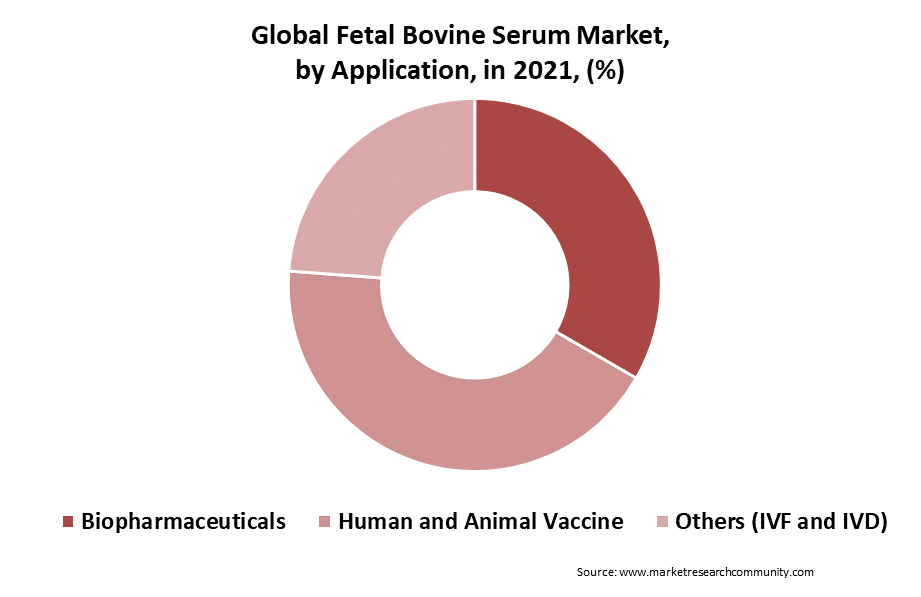 The biotechnology & pharmaceutical industries sector accounted for the largest revenue contributor by end-user and is anticipated to expand significantly over the forecast period. Due to increased usage of fetal bovine serum for the development of biopharmaceuticals and human and animal vaccines. Additionally, rising consumer demand from consumers of conventional serum and improvements in academic and research endeavors by the commercial and public sectors are the main drivers of market expansion. 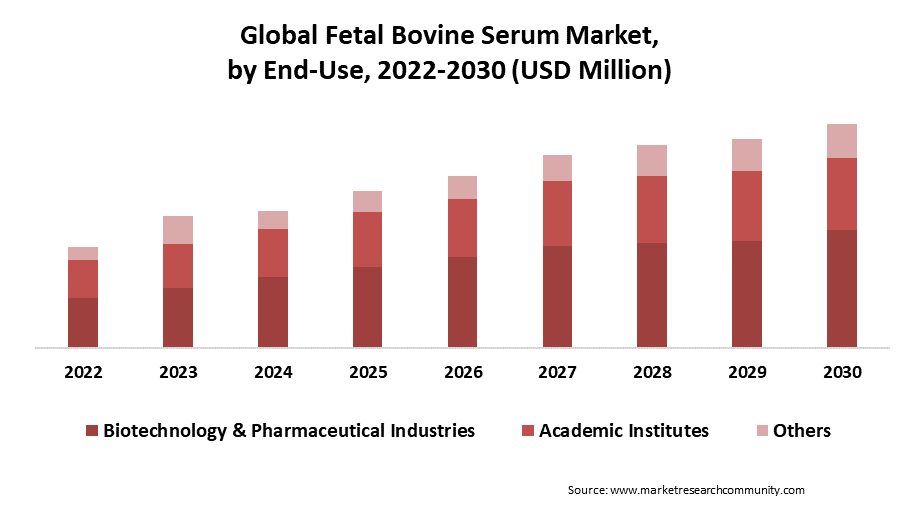 The regional segment is divided into North American, Asia-Pacific, European, Latin American, and Middle East & Africa. The two largest markets for fetal bovine serum at the moment are North America and Europe, and they are anticipated to hold a higher share of the market during the projected period. This is owing to the large numbers of cattle and bovine in these areas, which allow the production of fetal bovine serum, as well as the significant amount of R&D activities carried out. Due to the enormous amount of cattle in the population and the favorable government funding for research and development, Australia is anticipated to offer the largest market opportunity in the Asia Pacific region.

The competitive landscape of the market has been analyzed in the report, along with the detailed profiles of the major players operating in the industry. The majority of manufacturers are concentrating on new product launches, improvements to current products, and mergers and acquisitions. –