The chelating agent is known as a chemical compound that reacts with the metal ions for the formation of water-soluble and stable metal complexes. The agent rearranges the chemical composition of metal to improve the general bonding likelihood and stability. Naturally occurring chelating agents are more favorable for the removal of toxins from soluble concentrations due to their biodegradable and nontoxic properties.

The scope of clean alternatives in multiple industries such as the oil processing market, detergents, and garment market combined with the augmented expansion of eCommerce sectors in developing countries like India, Brazil, and Mexico owing to the large scale supply of the products is expected to create lucrative opportunities for the natural chelating agents market. Additionally, the need for green alternatives to existing toxic chelating agents such as ethylenediaminetetraacetic acid (EDTA) for reducing the adverse effects on the environment is also anticipated to create profitable opportunities for the growth of the natural chelating agents market during the forecast period.

The product type segment is separated into sodium gluconate, glutamic acid diacetate (GLDA), ethylene diamine disuccinate (EDDS), methylglycine diacetic acids (MGDA), sodium iminodisuccinate, iminodisuccinic acid (IDSA). The sodium gluconate segment is anticipated to contribute the largest share to the growth of the natural chelating agents market. The factors such as the protection of cosmetics from discoloration and rancidity of the cosmetic oils, excellent chelating ability in alkaline solutions, and increased use as a stabilizer, thickener, and sequestrant in food additives are estimated to support the growth of sodium gluconate segment during the forecast period. Furthermore, the glutamic acid diacetate (GLDA) segment is also expected to contribute a significant share to the natural chelating agents market owing to the low inhalation toxicity, readily biodegradable according to the OECD 301D tests, non-skin irritant nature, and heavy metal chelating properties to prevent the precipitation of the products. 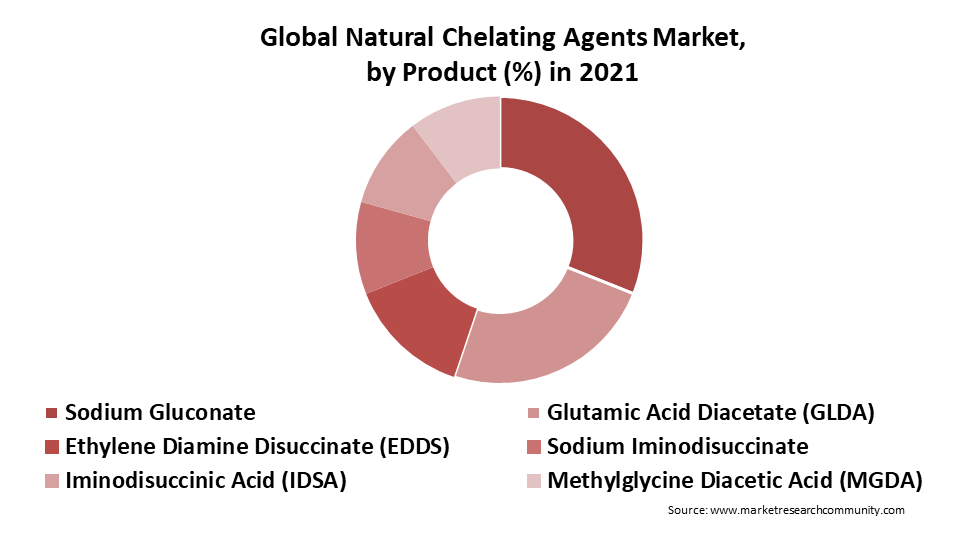 The application segment is divided into pulp and paper, detergents & cleaning agents, agrichemicals, personal care & cosmetics, food and beverage, and water treatment. The pulp and paper segment is projected to contribute the largest share to the growth of the natural chelating agents market. The factors such as lower bleaching costs owing to the reduced brightness reversion improved paper quality with controlled pitch formation in the paper pulp, and growing demand for tissues and graphic papers are expected to support the growth of the pulp and paper segment during the forecast period. Additionally, the food and beverage segment is also expected to contribute to the natural chelating agents market growth due to the prevention of oxidation in food products, and increased use of natural chelating agents in canned products, baking mixes, carbonated beverages, shortening combined with the butylated hydroxytoluene as a food additive.

Europe is also anticipated to register the fastest growth in terms of value during the forecast period. The factors such as the rising demand for natural chelating agents in applications such as water treatment, food & beverage, agriculture, personal care, and others owing to favorable environmental regulations, and increased demand for naturally derived clean and cruelty-free formulations in terms of skincare, fragrance, makeup, and, personal care are estimated to fuel the market growth in the European region due to the high demand for eco-friendly ingredients like a natural chelating agent.

At what rate the Natural Chelating Agents Market is estimated to grow?

The Natural Chelating Agents Market is projected to be worth USD 6.8 Billion by 2030.

Who are the main players operating in this industry?

Which region registered the fastest growth during the forecast Period?

Europe contributed the largest share of the market growth.

What is the major market-driving factor?

The increased rising demand from the cosmetic industry for reduced risks of oxidation and rancidity and increased awareness of biodegradable sequestering agents.

Sodium Gluconate are anticipated to contribute the largest share to the product segment.