The rising adoption of a vegan lifestyle among the population is expected to create favorable conditions for market growth owing to the growing health consciousness and reduced usage of animal-based ingredients such as meat and cow milk. For instance, the report by the infamous UK hypermarket Sainsbury’s projected that by 2025, vegans and vegetarians are anticipated to make up a quarter out of all consumers among the British population, whereas the flexitarians (individuals who eat both meat-based and plant-based foods) would constitute just under half of the population. Thus, the increased vegan population is anticipated to boost the demand for vegan, or non-dairy products owing to the growing consumer awareness of the nutritional benefits such as improved bone health, weight loss, and positive environmental impact.

Moreover, the wide availability of plant-based products in mainstream stores is expected to boost the non-dairy yogurt market statistics during the forecast period. For instance, according to the global survey conducted by the National Sanitation Foundation, over 88% of food industry specialists stated that the demand for plant-based products is expected to witness a sudden increase owing to the 74% consumer choice preference for plant-based products in terms of healthier lifestyle adoption. Additionally, around 60% of customers are in the favor of choosing vegan products due to the environmentally friendly aspect. Thus, the increased positive demand especially from vegan consumers is estimated to increase the demand for plant-based products during the projected period. In the context of the region, Europe is expected to contribute a significant share to the market growth owing to the factors such as the growing investments by leading market players for new product launches combined with the largest presence of consumer base in terms of increased vegan product awareness are projected to boost the market growth in the European region.

Non-dairy yogurt, also known as vegan yogurt, is plant-based yogurt that uses non-dairy liquids such as oat, soy, almond, coconut, or cashew as the base and then immunizes these with the culture of bacteria in the form of probiotic powder. The yogurts also contain live probiotics, also known as beneficial gut bacteria, that aid in healthy digestion processes.

The increased consumer adoption in terms of nutritional and healthy alternatives coupled with the prevalence of lactose intolerant cases among the population are the major factors that accelerate the non-dairy yogurt market statistics due to the usage of plant sources such as soy, coconut, and cashews instead of dairy products for the production of non-dairy yogurt. Furthermore, the high demand for plant-based alternatives to conventional products due to the restricted usage of animal-derived ingredients and the surging vegan culture/lifestyle among the population boosts the market growth during the forecast period.

The high manufacturing costs of vegan products especially, vegan ice creams, yogurts, and other frozen products owing to the need for an expensive temperature-controlled environment hamper the growth of the non-dairy yogurt industry. Moreover, the poor production practices especially in Asian and African countries due to lack of access to logistics and low-cost temperature-controlled facilities also hamper the market growth during the forecast period.

The scope of introducing vegan product innovations into the retail stores is expected to provide lucrative opportunities for market growth during the forecast period owing to the surging emphasis by competitive market players on product launches. Furthermore, the rising popularity among end-users in terms of nutritional benefits of vegan products such as reduced risks to cardiovascular diseases combined with extensive campaigns by social influencers like athletes, celebrities, and other public influencers to encourage the large adoption of a vegan diet is also projected to create profitable opportunities for the market growth during the forecast period.

The non-dairy yogurt market has been significantly impacted due to the COVID-19 pandemic in many different parts of the world. The factors such as reduced material sourcing, limited availability of raw materials, and economic slowdown are the major impacts of COVID-19 which hampered market growth. Shipments were impacted during the initial lockdown due to the disrupted supply chain and the closure of a manufacturing facility which led to the decline, especially in the chemical and rubber sector. However, the circumstances have stabilized and as a result, it is determined that COVID-19’s overall impact on the industry is moderate. Post covid-19, there was a positive impact on market growth due to the growing rate of urbanization and industrialization.

The product segment is separated into soy yogurt, almond yogurt, coconut yogurt, oats yogurt, rice yogurt, and pea yogurt. The soy yogurt segment is expected to contribute the largest revenue share of over 46.2% in 2021. The factors such as high protein content as compared to the cow milk yogurts, presence of healthy and unsaturated fats combined with the health benefits, especially for diabetic people in terms of lower cholesterol, prevention of osteoporosis, and decreased blood sugar levels by the product consumption are estimated to support the contribution of the soy yogurt segment in non-dairy yogurt market growth. Furthermore, the almond yogurt segment is also expected to register the fastest CAGR growth during the forecast period owing to the presence of less saturated fat, high delivery of fibers, and sodium combined with low sugar content. 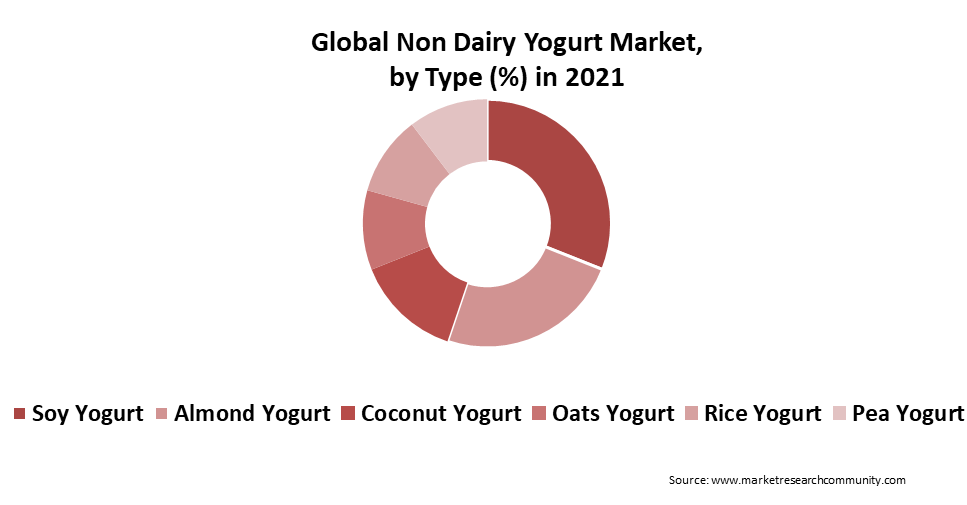 The nature segment is bifurcated into organic and conventional. The organic segment is estimated to contribute the largest share in terms of revenue over USD 3.1 billion to the market growth during the forecasted period. The factors such as the increased incorporation of milk produced from seeds, nuts, and grains, which include nuts like macadamia, coconut, hazelnuts, almond, pistachios, and cashew and seeds such as soy, and hemp, flax with grains as oats and increased adoption especially in developed countries such as Europe and North America due to the upsurge in consumption of organic production in terms of consumer health consciousness are anticipated to support the growth of the organic segment. Additionally, the conventional segment is also expected to register the fastest CAGR growth during the forecast period owing to the strict regulations for food quality improvements owing to the food quality & safety with reduced usage of preservatives and wide product availability in retail stores.

The sales channel segment is divided into mainstream stores, specialty stores, online stores, and food services. The mainstream stores are anticipated to contribute the largest share to the industry growth in terms of volume. The factors such as the availability of a wide range of products, in-store discounts for new product launches, and bulk purchasing options at the same location are estimated to support the growth of the mainstream stores segment. Also, the online stores are expected to register substantial growth during the forecast period owing to the consumer shift to reduced visits to physical stores for product purchases due to busy lifestyle, increased benefits to the sellers in terms of upfront cost reduction such as store repairs, rents, shop design and inventory combined with the customer benefits like fast product delivery, quick price comparison and comfort of shopping from home. 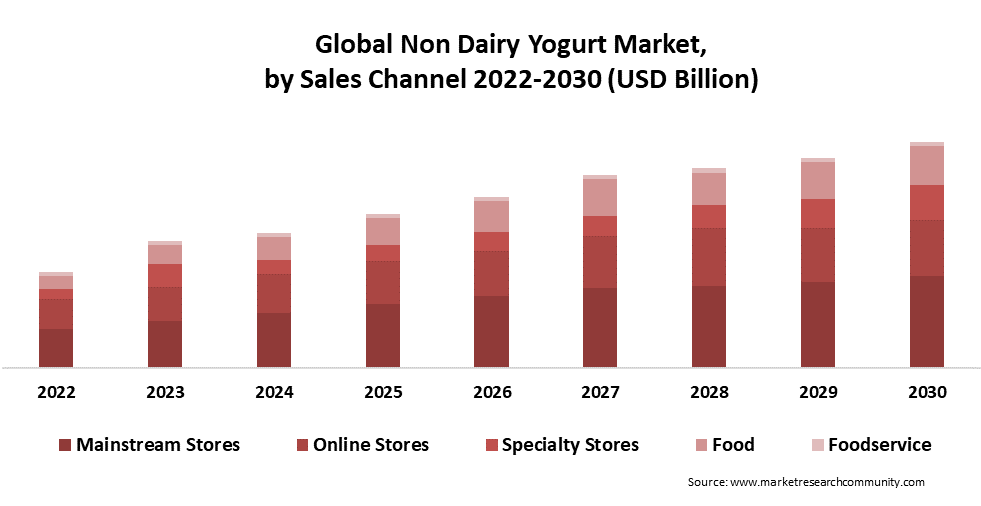 The regional segment includes Asia Pacific, Europe, North America, the Middle East, and Africa, Latin America. Europe is expected to contribute the largest share in terms of revenue over 50.2% to the market growth. The factors such as growing health-conscious and vegan culture in developed economies such as the U.K., Germany, and France customer coupled with the rising influence of social media in terms of trends related to vegan product health benefits especially vegan yogurt and campaigns on television channels against animal cruelty for meat and dairy products production are anticipated to fuel the growth of the industry in the Europe region.

Asia Pacific is also projected to register the fastest CAGR growth of over 20.3% during the forecast period owing to the strong presence of gluten-free and vegan products especially soy yogurt in Japan, the growing number of lactose intolerant population, and rising consumer preference for the vegan diet are estimated to fuel the non-dairy yogurt market statistics in the Asia Pacific region.

What is the growth outlook for the Non-Dairy Yogurt Market?

The Non-Dairy Yogurt Market growth outlook is worth USD 13.12 Billion by 2030.

Europe is expected to contribute the largest share of the market growth.

The increased consumer adoption in terms of nutritional and healthy alternatives coupled with the prevalence of lactose intolerant cases among the population are the major factors that accelerate the non-dairy yogurt market.

Soy Yogurt are rising to contribute the largest share to the product segment.