The increased usage of agarose as a DNA and protein-separating agent is expected to create favorable conditions for market growth owing to the rising production of chemicals. For instance, according to the official statistics forum named Eurostat, the production of chemicals experienced a significant boom in 2020 with over 94.2 million tonnes in the quantity. Thus, the high demand for agarose in multiple chemical applications is anticipated to boost the market growth during the forecast period owing to the growing synthesis of chemical components such as proteins and other fragments.

How much is the Agarose Market worth ?

Moreover, the growing demand for agarose, especially for multiple chemical experiments involving DNA fragments detection and chemical staining agents is anticipated to witness substantial growth during the forecast period owing to the large production of chemical compounds using the electrophoresis techniques such as high thermal powered agarose gels. For instance, as per the research paper published by the National Center for Biotechnology Information, the scientists uncovered the hypothesis that the aggregate size of semi-denaturing agarose gel electrophoresis helps in effective profiling of the blotting signals generated in the multiple chemical experiments. Thus, the wide application of agarose gel-based products on chemical processes like electrophoresis is projected to positively augment the market growth during the forecast period. In the context of the region, Europe is anticipated to contribute a substantial share to the market growth. The factors such as the growing spending in infrastructural development and research and development of safe chemical products such as non-toxic agarose powder coupled with the large presence of end users such as chemical, medical, pharmaceutical, and food industries are projected to boost the market growth in the European region during the forecast period.

Agarose is known as a heteropolysaccharide that is extracted from specific red seaweed which appears as a linear polymer made up of repeating units of the agarose. In simpler terms, agarose gel is a three-dimensional matrix that is shaped of helical agarose molecules in the supercoiled bundles collected together into the three-dimensional structures with pores which enables the passage of the biomolecules.

The surging demand for agarose in chemical applications owing to the increased DNA electrophoresis processes combined with the rising usage in medicine, biological fields, and food products as gel agents are the major factors that boost the agarose market statistics. Furthermore, the rising adoption of non-toxic components in product manufacturing which involve nucleic acid electrophoresis, gel plates, immunodiffusion techniques, cell culture, and others also accelerates the market growth during the forecast period owing to the wide application in chemical processes.

The shortage of raw materials for the production of agarose combined with the high-cost synthesizing processes of agarose hamper the market growth during the forecast period owing to the chances of contamination in the product. Additionally, the risks of health hazards due to overexposure to agarose solid wastes also hampers the industry’s growth in the long term.

The agarose market has been significantly impacted due to the COVID-19 pandemic in different parts of the globe. The factors such as decreased sourcing of the materials, limited accessibility of the raw materials, and economic slowdown that is majorly caused due to the reduced global foreign direct investment (FDI) are the major impacts of COVID-19 which hampered the market growth. Shipments were impacted during the initial lockdown owing to the interrupted supply chain and the shutdown of manufacturing facilities which led to the decline. However, the circumstances have stabilized and as a result, it is determined that COVID-19’s overall impact on the industry is moderate. Post covid-19, there was a positive impact on market growth due to the growing rate of industrialization and production of chemicals for major end-use applications.

The type segment is bifurcated into gracilaria agarose, and gelidium agarose. The gracilaria agarose segment is estimated to contribute the largest share in terms of value during the forecast period. The factors such as increased demand for the production of edible agar combined with the wide applications in the cosmetic industry as a component in creams, shampoos, sunscreens, and soaps are projected to support the contribution of the gracilaria agarose segment in the agarose market growth. Furthermore, the delirium agarose segment is also expected to register the fastest CAGR growth during the forecast period owing to the increased use of agar gels for baked goods production, especially as the bake stable fillings, piping glazes, gels, and icings combined with the high demand as gel agent in ice creams and jellies. 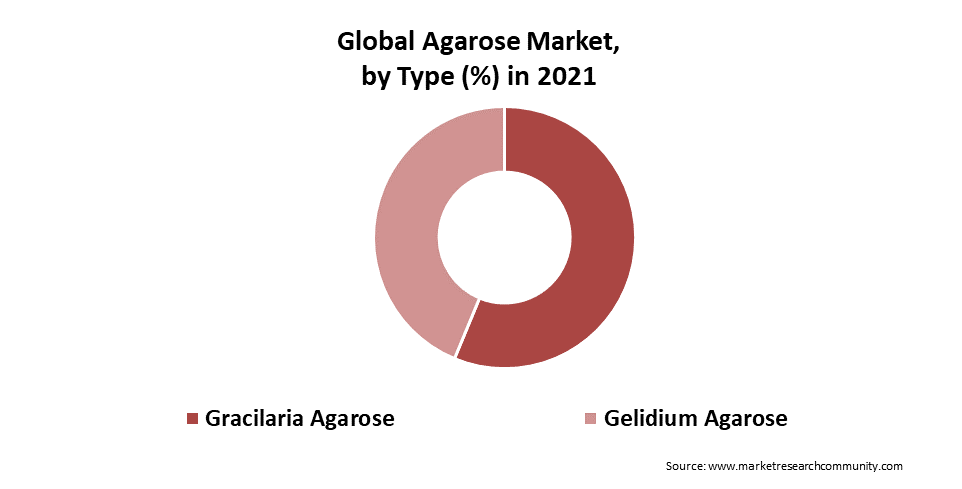 The form segment is categorized into powder and tablet. The powder segment is expected to contribute the largest share to the industry growth owing to the bulk usage in multiple industrial applications such as clinical, pharmaceutical, food & beverages, and others due to the maximum beads allotment in the quantities combined with the major application in the chemical industry which utilizes powdered agarose for the nucleic acid electrophoresis due to the properties such as high electrophoretic mobility, shorter run times of the tests, and yield the improved resolution. Additionally, the tablet segment is also projected to witness substantial growth during the forecast period in terms of volume. The factors such as the promotion of clean, consistent, and reproducible gels, elimination of hands-on inaccuracies associated with the weighing aspect, and easy handling due to the exceptional thermal stability are anticipated to support the growth of the tablet segment.

The application segment is separated into PCR analysis, blotting, and others. The PCR analysis segment is expected to contribute the largest revenue share to the industry growth during the projected period. The factors such as the precise separation of DNA fragments after the PCR amplification processes, effective compatibility with the staining agents like ethidium bromide and intercalating dye for photography or visualization under the UV light, and analysis of RNA fragments by the southern and northern blots are anticipated to support the growth of the PCR analysis segment. Moreover, the blotting segment is also estimated to register the fastest CAGR growth during the forecast period owing to the observations of macromolecules like proteins or nucleic acids from the complex mixture, coupled with the detection of the elements through the specific probe.

The end-user segment is separated into academic institutions, hospitals, diagnostic centers, pharmaceuticals, and biotechnology. The pharmaceutical and biotechnology segment is expected to contribute the largest revenue share of over USD 81.1 million during the forecast period. The factors such as increased emphasis on agarose electrophoresis processes owing to the usage of agar gel for isolation of organic molecules coupled with the high demand for agarose as DNA analysis, antigen testing, protein, vaccine testing, and antibodies analysis during the drug development procedures are expected to support the growth of the pharmaceutical and biotechnology segment. Additionally, the hospitals and diagnostic centers are also estimated to register the fastest CAGR growth due to the large demand for agarose-based wound dressings, and high usage in the production of bioplastic-based drug production and surgical dressings. 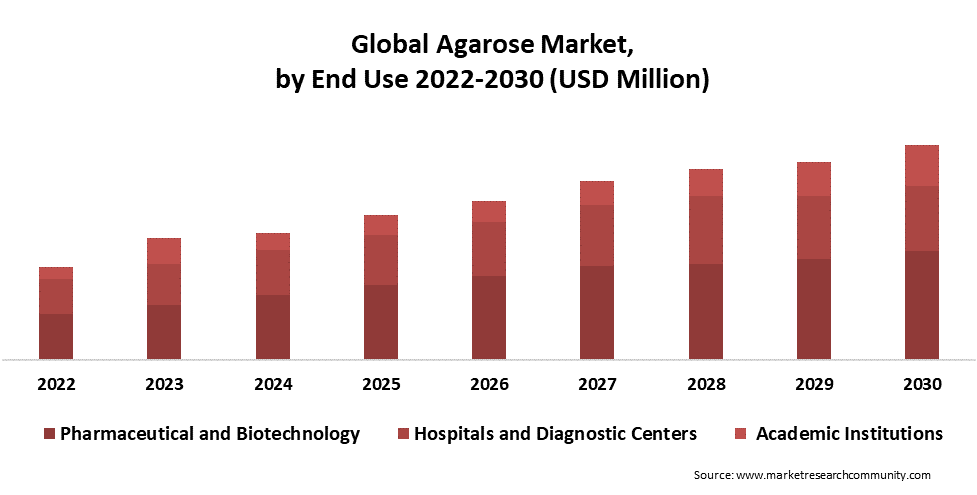 The regional segment includes Asia Pacific, Europe, North America, the Middle East, and Africa, Latin America. Europe is estimated to contribute the largest share to the industry growth during the forecast period. The factors such as increased expenditures on research initiatives such as epidemic response and preparation, diagnostics, and therapies, coupled with the large presence of market players are expected to fuel the industry growth in the European region.

North America is anticipated to register the fastest growth in terms of value during the forecast period. The factors such as increased product innovations with the usage of agarose as the major component, coupled with the growing demand for agarose, especially in the large consumption of packaged food and beverage products are estimated to fuel the growth of the market growth in the North American region.

The industry competitive landscape has been examined in the report, in terms of detailed company profiles of the key players operating in the market. Further, the fierce industrial rivalry, large market concentration, and augmented emphasis on major market share in terms of customer base across the international markets have accelerated the growth of the sample preparation market. Additionally, the competitive edge over other market players including partnerships, strategic alliances, mergers and acquisitions, and large investments are also elaborated in the report. Key players in the market include-

What is the Agarose Market growth size?

Europe is estimated to contribute the largest share of the market growth.

The surging demand for agarose in chemical applications owing to the increased DNA electrophoresis processes combined with the rising usage in medicine.

Gracilaria Agarose are expanded to contribute the largest share to the product segment.